Mrs. Ifeanyi Chima was one of Lagos delegates that attended a peace rally organised for women by the First Lady, Mrs. Patience Jonathan, in Abuja on August 15, 2013. 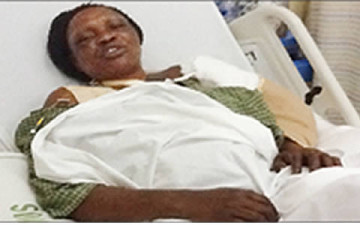 The vehicle, which Chima and five other women were travelling in, had an accident at Gwagwalada Road, near Abuja, when they were going back to Lagos the following day.

Chima and four others were lucky to survive the accident, but sustained various degrees of injuries.

Their coordinator, Princess Abigael Adisa, died in the crash. Until her death, Adisa was the Coordinator of the Women for Change and Development Initiative in Ifako/Ijaye Local Government Area of Lagos.

Chima, in an interview with Saturday PUNCH at the Intensive Care Unit of Primus International Super Specialty Hospital (popularly known as Indian Hospital) in Karu on Tuesday, painted a sad picture of how she almost lost her limbs to the accident.

She called on Nigerian doctors to “sit up” like their foreign counterparts and improve on their relationship with patients.

She said, “I was involved in a fatal accident along Gwagwalada Road after the Women rally in Abuja on our way back to Lagos. We were six women and a driver in the vehicle; five of us had injuries. Our coordinator died.

“Five of us were brought to this hospital. I had a broken left arm and dislocation on my left leg. Mrs. Titilayo Olorunda also had a broken leg. She has been taken to another ward because she was formerly here (in the intensive care unit). But after a surgery she was taken to her ward. When I had the injury, I had some open wounds in my hands.”

Chima also gave a vivid account of her experiences at the University of Abuja Teaching Hospital in Gwagwalada where, she said, a particular doctor exhibited poor attitude to patients.

“At the specialist hospital in Gwagwalada, instead of treating the skin, they covered it up. It was when they brought us here (Indian Hospital) when I was complaining bitterly that the doctor said they should open it. That was when they started treating the place I had bruises. I had my surgical operation some days ago.