Men of the Abia State Police Command have arrested four members of the same family over alleged murder of their kinsman, 58-year-old Samuel Nwakoromadugba.

The four suspects from Obiekwensu village, Aro-Ngwa in Osisioma Ngwa Local Government; Izuchukwu Uzoma, Kenneth Uzoma, Chika Uzoma and Edith Uzoma, were alleged to have conspired among themselves and killed one Samuel Nwakoromadugba of the same village, with machete at about 11.50 a.m last Sunday.

Uzoma and Nwakoromadugba families of Obiekwensu village, according to sources, had a dispute involving a case of alleged threat to life, before the incident, this was reported at the Osisioma police division by the deceased’s son.

Following the report, the father of the suspects was arrested and detained by the police at the Osisioma Division of the Abia Police Command, a development that angered the suspects who allegedly ambushed the deceased on his way home hitting him severally on the head with a machete, which led to his death. 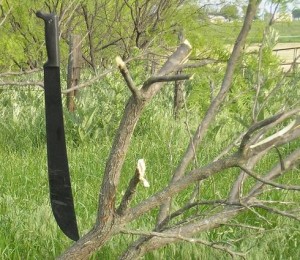 The incident could not be immediately confirmed by the Abia State Police Public Relations Officer.