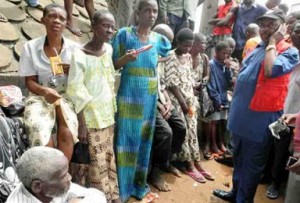 Obi’s letter titled: “Unconstitutional, illegal and forced deportation of Nigerians to Anambra State from Lagos State” reads: “I wish to respectfully bring to your due attention a very disturbing development that has vast national security and political implications.

“Last September and again on July 24, 2013, the Lagos State Government contrived inexplicable reasons to round up Nigerians, whom they alleged were Anambra indigenes (most of whom the SSS report shows clearly are not from Anambra State) and forcefully deported them to Anambra State, dumping them as it were in the commercial city of Onitsha (see attached SSS report).

“This latest callous act, in which Lagos State did not even bother to consult with Anambra State, before deporting 72 persons considered to be of Igbo extraction to Anambra State, is illegal, unconstitutional and a blatant violation of the human rights of these individuals and of the Nigerian Constitution.

“Your Excellency, no amount of offense committed by these people, even if deemed extremely criminal, would justify or warrant such cruel action by a State authority and in a democracy.

“Even refugees are protected by the law. Furthermore, the extant provisions of the Nigerian Constitution states: ‘Every citizen of Nigeria is entitled to move freely throughout Nigeria and to reside in any part, thereof, and no citizen shall be expelled from Nigeria or refused entry thereby or exit therefrom’.

“Sir, forced deportation such as this, which Lagos State seems to be making a norm in addressing its domestic challenges are egregious and calls into question the validity of Nigeria and its federating components. Such acts violate human decency, the rule of law and constitutionally ordered liberties. Were Anambra and other states in the federation to resort to such extreme measures, there would be total anarchy.

“It would amount to complicity on the part of the states and the Federal Government, if this issue is not thoroughly investigated and some form of censure brought to bear on Lagos State. I suggest, Sir, that you direct the Attorney-General of the Federation to investigate these incidents.

“Naturally, I have the obligation to protect the interest and welfare of all Nigerians resident in Anambra State irrespective of their states of origin and I would be left with no option other than reciprocity or reprisal.

“I will, however, put any such reaction in abeyance until Your Excellency has had the opportunity to address our concerns.

“Please accept, Your Excellency, the renewed assurances of my highest regards.”

Also, the Onitsha branch of Nigeria Bar Association, NBA, rising from a meeting in Onitsha, has frowned at what it described as flagrant violation of human rights of some Nigerians by the Lagos State government and warned that it could be forced to take appropriate legal action against Lagos State government if the ugly incident was not redressed.

In a communiqué, the chairman, Mr. D.C. Maduewesi and secretary, Mr. Steve Ononye, the association recalled that a similar incident occurred at the same Upper- Iweka in Onitsha last year in which over 100 persons of South-East origin residing in Lagos State were deported to Anambra State without any reason.

According to the association, most of the victims of the illegal deportation were innocent Nigerians who lived below poverty level and regretted that a state like Lagos that has a Senior Advocate of Nigeria (SAN) at the helm of affairs could embark on flagrant abuse of the rights of fellow Nigerians.

The association wondered when it became the norm for a state in the country to engage in internal deportation of fellow citizens without tangible reasons.

The Onitsha NBA therefore called for adequate compensation from Lagos State government to alleviate the suffering already experienced by the deportees.