A group in the Niger Delta, Leadership, Peace and Cultural Development Initiative has threatened to mobilise other civil liberty organizations to stage a peaceful protest to the National Assembly in Abuja over what it described as the scarcity of kerosene in the country and the attendant hardship to the people. 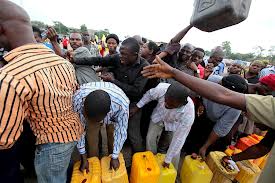 The protest which is slated for Tuesday next week is to bring to the notice of the upper chamber the suffering of the masses over the scarcity of the product in the market.

The group is also calling for the removal of the Pipeline and Products Marketing Company (PPMC) boss over his alleged failure to effectively tackle the issue of kerosene scarcity in the country.

In a letter addressed to the Senate President entitled “A request for audience”, and signed by its National President, Pastor Reuben Wilson and eleven others,  the group described as disturbing the plight of the masses most of whom depend on kerosene daily for domestic use.

According to the National President of the group said, “we are collaborating with other civil liberty organizations to organize a peaceful mass protest calling for the sack of the Managing Director, Pipeline And Products Marketing Company (PPMC), Mr. Haruna Momoh, for his failure to effectively address the issue of kerosene scarcity in the country.

“We are particularly worried about the scarcity of kerosene because of its importance to the welfare of the masses. The masses daily experience untold difficulties and agonizing moments in their bids to get kerosene for their daily needs.

“It is therefore, a matter of national urgency for the kerosene scarcity to be diametrically addressed to enable the masses enjoy the on-going National Transformation.”