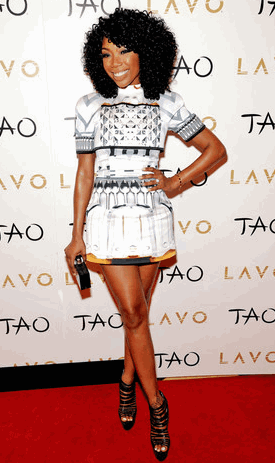 It hasn’t been confirmed though, because these reports originated from the South African Twitterverse.

American R&B Star, Brandy was stood up or should I say disgraced as she performed to a crowd of 40 in a stadium meant for 90,000 people.

Brandy was a surprise guest at the FNB stadium in Soweto, but unfortunately no one knew she was playing.

80% of the people had already left before Brandy mounted on stage.

“People didn’t know there was a concert after the games. No one knew Brandy was around. Maybe a 40 people audience … She sulked after two songs and walked off.

“There are more people there on a random Tuesday… Depressing.”

Added @My2_Melo: “I gave up the min I saw the empty stadium. Brandy performing for the chairs!”

While @dawn_ngwenya said: “Brandy is going to perform for herself and Mbaks only,” referring to South Africa’s minister of sport, Fikile Mbalula.

The singer reportedly walked off in embarrassment after just two songs.

The country’s national TV channel SABC reportedly also ended their broadcast of the concert before Brandy could even emerge on stage.