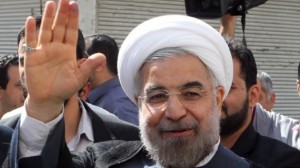 Iran’s new President Hassan Rouhani took the oath before parliament at a ceremony attended for the first time by foreign dignitaries including regional leaders.

The ceremony in parliament took place on Sunday, a day after Rouhani was formally endorsed by Iran’s supreme leader, Ayatollah Ali Khameini, in a ceremony that was attended by top Iranian figures including outgoing president, Mahmoud Ahmadinejad, and foreign dignitaries.

Rouhani, a relatively moderate cleric who won the June 14 presidential election by a significant margin and ran on a platform that included a promise to follow a “path of moderation” in international affairs and to ease restrictions on Iranian civil liberties.

His election has raised hopes that Iran and the US can solve the dispute over Iran’s nuclear programme.

But Iran expert Hamid Dabashi said a change in approach is needed from the US, as well. “Already there are many indications that he will be drastically different. No flamboyant statements, no rash decisions, no regional or international belligerence, at least at the rhetorical level.”

However, Dabashi added, “it takes two to tango”.

“The ‘Western world’ too needs to drop its ideological and rhetorical language and deal with Rouhani on equal footing,” he said. “The Iranian presidency is neither all-powerful, nor entirely powerless.

“We need to think of the Islamic Republic in terms of the ruling apparatus which includes the military, intelligence, security, and clerical establishment and their collective will to survive – rather than a single-minded supreme leader calling all the shots.”

The US House of Representatives on Wednesday passed the toughest package of sanctions yet, targeting Iran’s oil exports.

For millions of Iranian voters who elected Rouhani, the past decade has been marked by steadily declining living standards due to a deepening economic crisis exacerbated by sanctions.

The direction and success of Rouhani’s presidency depends in part on his ability to redefine Tehran’s relations with the West.

Dabashi said he is hopeful that Rouhani will restore “some sanity” in domestic affairs and use his internal legitimacy to address Iran’s regional and global issues.

Rouhani secured a clear victory in the June election, with voter turnout at 72.7 percent. [AlJazeera]