Gift Uwame, better known as Muma Gee, got married a few years ago and practically went off the radar. 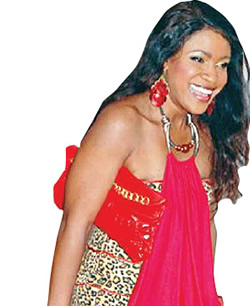 Who will blame her though? With the way celebrity marriages break up these days, every right-thinking woman will go the extra mile to keep a happy home.

In fact, she readily admitted on the telephone, that she would put in her best to ensure the success of her marriage.

“Anything that is not built on a solid rock will crumble. You know how celebrity marriages break up nowadays.  My marriage is important to me right now. There was a time I was saying that I was married to my music. Now that I am married to my man, I have to give it all my best,” she said.

Some people said Muma went off the scene because her  husband, Prince Eke, advised her to do so.

But Muma said, “That is their business. I don’t care what people say. Anybody can say what they want, I am not bothered.”

However, the artiste said being off the scene didn’t mean not doing anything career-wise. She told Saturday Beats that she had been in the studios and would soon come out with what would wow entertainment lovers.

“There comes a time in one’s life you have to take time off the scene and take things slow. I will soon come back to my ‘madness’. I hope to release my new album sometime in November. I have been busy. It is just that there are some things I don’t have to make a noise about,” she said.

Honoured in her husband’s home town, Ngor Okpala, recently, Muma Gee said she is happy to be recognised and appreciated by her husband’s people.

Muma got married to her actor husband in 2011 in Port Harcourt.