Blessed with good looks, Uche Iwuanyanwu is one of the rising actresses in Nollywood you cannot help but admire for her professional exploits. In this interview, she talks about her blossoming career, and why she prefers to star in Ghanaian movies and many more… 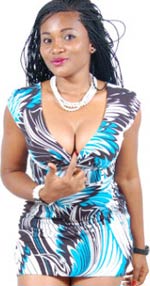 You are becoming more beautiful, and your shape is something else these days.What’s the secret? I try to stay in shape these days because I am more mature now than before. I am careful about my diet. And I have always said that if you have got it, you should go head to flaunt it. In recent times, you have been plying your trade in Ghana.

What’s so special about Ghana? I don’t have a stake in Ghana. But it’s just that I have been getting movie roles from Ghanaian producers in recent times.

Are you implying that Nollywood producers are not recognising with your talent? I’m not saying that Nigerian producers are not reckoning with my acting prowess.But it’s just that I have not been steady in the industry because of my education. Until last year, I was still a student at University of Jos. A producer cannot afford to wait patiently for you when you are out of reach.That’s what affected me. But in the case of Ghanaian producers, they know when to get in touch with me, mostly when I’m on break. However, I am finally back in Nollywood, having graduated from the university. I am ready to mingle in the industry now than before.But that does not mean I cannot star in Ghanaian movies when I’m invited to do so.

Uche Let’s talk about sexual harassment in Nollywood. What is your own story? I am a very pretty girl and it’s not as if I’m praising myself. You know when you are beautiful, certain things are bound to happen. So, I will be lying if I deny the fact that men don’t admire my beauty. Yes, they do, and almost ceaselessly. But I think the most important thing is for one to remain focused on your goals. If you are good in what you are doing, a producer will definitely find it difficult not to give you a role in his new movie simply because you refused to sleep with him.

Would you say your beauty has affected the way you relate to other people? My beauty cannot affect the way I relate to other people. I am not the only beautiful girl in town. I am just the girl next door. No doubt, being beautifu has its own advantages. But it doesn’t mean that men should pay your bills. Despite your beauty, you should be able to work very hard to avoid depending on men for everything you need as a woman.

What’s your latest projects? I just concluded the production of a movie in Ghana titled, ‘Cheaters’. I acted alongside Jackie Appiah, a USA based actress, Okawa Shazney and Elikem Kurmodzie, who represented Ghana in the ongoing Big Brother Africa reality TV show. The movie premiered yesterday in Ghana at Silverbird Cinemas and is due to hit Nigerian cinemas today. It is about the game of cheating that is peculiar with married couple. I played the role of a married woman in the movie.

Did you undergo any type of training to acquire acting skills? Acting is inborn in me,but I tried as much as possible to sharpen my talent by acquiring more knowledge in acting. I have a Diploma in Mass Communication before I later pursued a degree program in Economics. During my Diploma program, I did some courses in Theatre Arts. I have always wanted to become an actress. Recently, we have observed that rising actresses always land in big deals whenever we feature them in our celebrity pages! Well, I am not aware of it. But it is possible for that to happen. I am not here to castigate anyone. It’s a free world. If they decide to help themselves that way while waiting for the big break in acting, then it is their own cup of tea. But I won’t date a guy simply because he has money to throw around.

What is your idea of sex? Is sex not supposed to be between a man and a woman when they are married? I am not married; hence I am not supposed to discuss sex other than what I have just said. You can ask me this question when I’m married

How do you cope with the roles you play in Ghanian movies? Well, you have to understand what acting is about first. Acting is doing something that is not you; you are improvising a character that is not ours. If I’m casted to play the role of a prostitute; then it’s my duty to make you believe I am one. At this point, I am acting. I will transform into a prostitute just to interprete my role.

Does this not affect your emotion, especially when you are acting alongside someone you admire a lot? It cannot affect you emotionally because there are many people on set. Perhaps, you may have crush on that person, but it’s left for you to decide on what to about it. For me, when I am acting, my emotion is put to check.

But would you date an actor? Of course, it is a free world, l could date someone l have acted alongside with if I am attracted to the person. But I won’t because I don’t want to combine business with pleasure. Besides, I’m already in a relationship. l don’t have what it takes to handle two men. When I was invited to star in a movie in Ghana; I met John Dumelo on set and I really liked him. I acted as his girlfriend; we kissed and did other things, but it ended right there on set. It is a person’s perception; it has to do with your upbringing.

This is a normal thing in every industry. It doesn’t just happen in the movie world alone. Bankers are dating bankers while students are dating their fellow students. These are the people you work with and meet every day of your life. So, if you do not know how to separate your work life from your private life, you will end up dating a guy in your office. But as far as I’m concerned, I do not think I will like to date someone in the industry no matter how much he is attracted to me. I have my own man and even though he isn’t an actor, he loves what I’m doing for a living.

In the movie, ‘Cheaters,’ I cheated my husband by having an intense affair with another guy.While it lasted, it ended as soon as we finished shooting the movie. After the production, we walked away because all we did was acting. I am not saying the guy I played alongside with is my enemy. But what we did ended with the production. Uche Uche How far can you go in interpreting a role? As far as I can go to interpret that role.

Like I said earlier, if I have to interpret a role in the bedroom, instead of wearing a bra and a pant, I would prefer to wear a bum-short and a bra- top or better still, wear a two-piece swimming suit and interpret the role in a swimming pool. That’s acting. And if the bum-short doesn’t interpret the role well enough, the director diverse a means to make up.

What has been your most challenging movie and why was it challenging? My most challenging movie is titled ‘Somewhere in Africa’. The movie was like the ‘Sarafina’ movie in South Africa and I played a sensitive role in the movie. It tells a gripping story of Yusuf Mumbasa (Majid Michel) who, after escaping an assassination attempt by the King of Kimbala, managed to capture power via a coup d’état and ordered for the killing of all previous government appointees. I played the role of a leader who led some students to see the president following the injustice that pervaded the land.

It was challenging for me because I couldn’t see myself going to the extreme to re-enact what happened in real life. I interpreted my role in the movie very well that I was nominated for an award. The movie was shot in Ghana and it starred other actors such as David Dontoh, Kofi Adjorlolo, Amornabea Dodoo, Eddie Nartey, Roslyn Ngissah, Martha Ankomah, Eddie Watson, Helen Asante, Gloria Sarfo and Eve Asare.

These days ladies are doing everything to look sexy? I thank God that Iam who I am. But if I wasn’t born this way, I wouldn’t have been happy with myself. And if it means going under the knife to get it, so be it. I am not going to castigate the women who do it because life would be very boring if you do not have what it takes it to ‘flaunt it.’ No one would take notice of you.

How come you were not nominated for our sexiest in Nollywood project? I wasn’t in the country and more so, I lost my Black Berry. I guess my friends tried my GSM lines but couldn’t reach me.

How did your parents react when you veered into acting? My parents love it and they are supporting me. Perhaps, I wouldn’t have been here today if they didn’t support me.

Can you date a guy who promises to buy you an expensive car? I cannot date a guy for his money no matter what. Except I love him