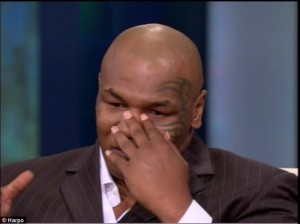 Mike Tyson said he is a “vicious alcoholic” and on the verge of death after years of lying about his drug and alcohol use.

The former heavyweight made the revelation during a press conference in Verona, New York, to promote ESPN’s Friday Night Fights.

According to the Daily Mail, Tyson told the presser: “I’m a bad guy sometimes…I did a lot of bad things, and I want to be forgiven… I wanna change my life, I wanna live a different life now. I wanna live my sober life.

“I don’t wanna die. I’m on the verge of dying, because I’m a vicious alcoholic.”

Tyson went on to say he had spent the last six days sober, a situation he described as “a miracle”.

“I’ve been lying to everybody else that think I was sober, but I’m not. This is my sixth day. I’m never gonna use again.”

Tyson has had a highly public battle with drug and alcohol addiction, having spent three separate stints in rehab. However, in an interview last year he claimed he had been sober for three years.

In the press conference he also admitted he had contemplated suicide five years ago but that the loss of his four-year-old daughter, Exodus, who died in 2009 after strangling on a cord while playing on a treadmill, had acted as a wake-up call.

“I didn’t think I’d be here much longer,” he said. “I was planning on killing myself. I was overdosing every night. I couldn’t believe it – that I was waking up. Living life is different for me.” [NL]