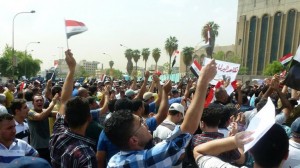 Thousands of protesters in and around Baghdad and southern Iraq have rallied against lawmakers’ lavish benefits, despite heavy security measures that kept many away, particularly in the capital.

Demonstrators criticised lawmakers’ retirement benefits in particular, which amount to thousands of dollars a month and stand in marked contrast to the daily struggle for many Iraqis who lack even dependable electricity and sewerage services.

“A huge amount of money goes to these people,” said Aamer Qasim, a pharmacist who attended a demonstration in the centre of Baghdad with several colleagues.

“The money should be spent on health, on education, on electricity, on infrastructure.”

Iraqi politicians have faced consistent criticism for their lavish pay and benefits, which in sum are several times that of the average citizen.

But anger has grown in recent in weeks in particular over the benefits awarded to them after they leave parliament.

Protests on Saturday were also held in several cities in south Iraq, including the port city of Basra as well as Nasiriyah, Najaf, Karbala, Kut and Hilla.

Riot police armed with batons, tear gas and water canon broke up one gathering in the city of Nasiriyah.

Witnesses and security forces said 11 people were wounded and 10 detained.