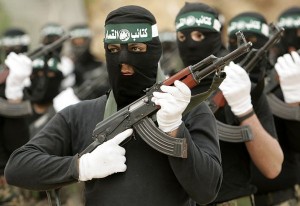 An Al Qaeda-linked militia founded by wanted Islamist commander Mokhtar Belmokhtar announced on Thursday it had joined forces with another armed group to take revenge against France for its military offensive in Mali.

Belmokhtar’s Mauritania-based Al-Mulathameen Brigade (The Brigade of the Masked Ones) and the Mali-based Movement for Oneness and Jihad in West Africa (MUJAO) said they had joined forces under a single banner to unite Muslims across the region.

“Your brothers in MUJAO and Al-Mulathameen announce their union and fusion in one movement called Al-Murabitoun to unify the ranks of Muslims around the same goal, from the Nile to the Atlantic,” the groups said in a statement published by Mauritanian news agency ANI.

Belmokhtar, a one-eyed Algerian former commander of Al-Qaeda in the Islamic Maghreb (AQIM), allegedly masterminded a siege in January of an Algerian gas plant in which 38 hostages, including three Americans, died.

Branded “The Uncatchable”, Belmokhtar is also thought to have been behind twin car bombings in Niger in May that left at least 20 people dead.

The Algeria siege and the Niger assaults were said to have been carried out in retaliation for France’s military intervention launched in January against Islamist groups in Mali.

Belmokhtar, who broke away from AQIM in 2012 and was involved in the fighting against Chadian forces in Mali, was reported to have been killed in action in March.

The reports, however, were never confirmed and it is believed that he remains at large.

He has been designated a foreign terrorist by the United States since 2003, with the State Department offering a $5 million reward for information leading to his capture.

MUJAO is thought to be led by Mauritanian ethnic Tuareg Ahmed Ould Amer, who goes by the nom de guerre “Ahmed Telmissi”.

The group broke away from AQIM in mid-2011 with the apparent goal of spreading jihad further into areas of west Africa not within AQIM’s scope.

It was one of a number of Islamist groups that occupied northern Mali last year, imposing a brutal interpretation of Islamic sharia law characterised by amputations, beatings and executions, before being ousted by the French-led military intervention.

The statement said the two men had signed a document announcing their merger and ceding command of the new movement to “another personality”, without revealing the identity of the new leader, according to ANI.

The statement said the jihadist movement in the region was now “stronger than ever” and threatened France and its allies, promising “to rout their troops”. [AFP]