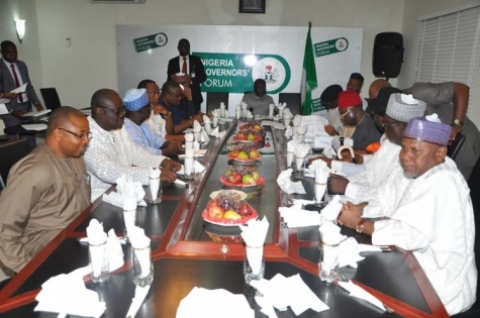 Sunday’s meeting of a faction of the Nigeria Governors Forum (NGF), led by Gov. Jonah Jang showed just how polarized the Forum is as only 10 governors and five deputy governors showed up for the meeting which held at the faction’s headquarters in Maitama District, Abuja.

This much was admitted by Gov. Godswill Akpabio of Akwa Ibom State, who gave indication that peace moves to reconcile the governors is already ongoing.

Akpabio, who is also the Chairman of the Peoples Democratic Party’s Governors Forum (PDPGF), said the governors should be seen to be working together under one umbrella.

“We believe that all governors should come together so that we can positively impact on Nigerians”, he said.

The meeting, in a communique, read by Dr. Olusegun Mimiko of Ondo State, reviewed the ongoing constitution amendment and constituted a five-man committee to streamline the proposed amendment.

Gov. Ibrahim Shema of Katsina State is to head the committee while other members of the committee are Theodore Orji of Abia State, Dr. Emmanuel Uduaghan of Delta State, Hon. Seriake Dickson of Bayelsa State and Mimiko.

Gov. Gabriel Suswam of Benue State, who is the chairman of the Presidential Committee on the ASUU strike, also briefed his colleagues on the progress so far made to resolve the lingering strike by university lecturers.

In attendance at the meeting were governors Martin Elechi of Ebonyi; Emmanuel Uduaghan of Delta; Gabriel Suswam of Benue; Godswill Akpabio of AkwaIbom; Olusegun Mimiko of Ondo; Ibrahim Shema of Katsina; Jonah Jang of Plateau; Theordore Orji of Abia; Seriake Dickson of Bayelsa and Acting governor of Taraba, Garba Umar.

Governor Sullivan Chime of Enugu State and Malam Isa Yuguda of Bauchi, who belong to Jang’s faction were absent.