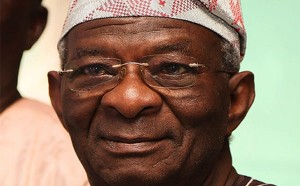 President Goodluck Jonathan on Wednesday visited Lagos State Governor, Babatunde Fashola, at his Marina residence to condole with him over the death of his father.

The News Agency of Nigeria reports that the president was accompanied by key members of his cabinet, among whom were the Minister of Petroleum, Mrs. Diezani Allison-Madueke and the Attorney-General of the Federation, Mr. Mohammed Adoke.

The Minister of Information, Mr. Labaran Maku; Minister of Sports, Mallam Bolaji Abdullahi; Special Adviser to the President on Inter-party Affairs, Sen. Ben Obi; as well as the Chief Imam of Abuja, Alh. Musa Mohammed, were also on the entourage.

The governor and his wife, Abimbola, his sisters – Mrs. Arinola Fuwa and Miss Olayinka Fashola — their children and some members of the state executive council, were on hand to receive the President and his entourage.

In his remark, Jonathan described the death of Fashola’ s father as saddening, noting that the late patriarch left at a time when he was most needed to offer counsel that would assist to further develop the nation.

He, however, said the deceased lived a fulfilled life, and left enduring legacies behind.

“When we hear about the death of the father of the governor, I was very sad because we know this is a period that we need our parents most, especially parents that would assist us in handling a number of responsibilities.

“Mr. Governor, it is a sad thing for you to have lost your father at this time, but one must also thank God for the life he has lived. For those of us who are Christians, the Bible tells us we are supposed to live three scores plus ten,” he said.