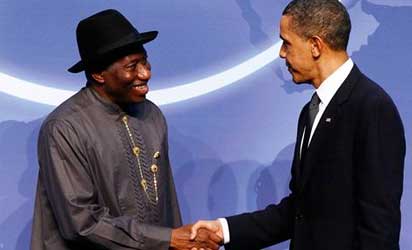 The UN Correspondent of the News Agency of Nigeria (NAN) reports that Jonathan would speak along Presidents Dilma Rousseff of Brazil, Barack Obama of U.S. and Abdullah Gul of Turkey.

In the past, Nigeria had addressed the UN session either in the afternoon or evening. In 2012, during the 67th session when the president addressed the assembly in the evening as the 29th speaker, the hall was virtually empty.

The president is also expected to have a lunch meeting with Nigerian professionals with `solid achievements’ in U.S. on Sept. 22 in New York. According to the Chairman of Nigerians in Diaspora in America (NIDOA), Mr Ganiyu Dada, the lunch meeting is aimed at discussing the solutions to the national development of Nigeria.

Dada added that the professionals should be willing to participate in the national development of Nigeria. He noted that NIDOA had been asked to submit about 500 names of `super Nigerian professionals’ with solid achievements in U.S. from where about 250 Nigerian Professionals would be chosen.

“They are expected to have Lunch Meeting with President Jonathan on Sunday Sept. 22 in New York from 1p.m. to 4p.m. This list will be submitted next week to the Nigerian Embassy which has the final say on who is invited to have lunch with the president.

“NIDOA is only to compile the list from the 50 States of USA including the Nigerian Professionals that are not yet members of NIDOA.

“You can attend lunch with the President without being a member of NIDOA, but there are a lot of benefits to join NIDOA,’’ Dada said.