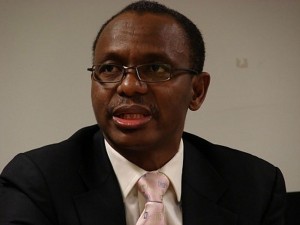 Former Minister of the Federal Capital Territory (FCT) and interim Deputy National Secretary of the All Progressives Congress (APC), Mallam Nasir el-Rufai, Wednesday upbraided the presidency over its recent attack on him.

El-Rufai said President Goodluck Jonathan’s response to an interview he granted over the weekend showed that he is “the promoter and apostle of ethnic and religious divisions of Nigeria, purely for political gains”.

The former minister had while featuring on Liberty Radio’s Guest of the Week programme alleged that it was unfortunate that Jonathan’s political handlers thought that if they introduced religion, they would be able to divide the north and garner Christians’ votes from the region for the president.

El-Rufai also alleged that the proceeds from crude oil theft were being used by Niger Deltans to amass arms to prepare for war should Jonathan lose in 2015.

However, in a statement on Sunday by presidential spokesman, Dr. Reuben Abati, el-Rufai’s allegations were dismissed and he was described as a “serial liar”, who should not be taken seriously.

But el-Rufai insisted in a statement yesterday that the president had resorted to ethno-religious politics to divide the country in order to promote his political ambition.

He also accused President Jonathan of giving more federal appointments to his kinsmen from Bayelsa State since he came to power.

“According to a report issued by Governance and Sustainable Initiatives Ltd., entitled Analysis and Lessons of the Current Geopolitical Distribution of Federal Appointments, the Jonathan administration is said to have favoured his home state of Bayelsa 200 per cent times more than the next states with the highest federal representation – Delta, Edo and Anambra.

“If Jonathan is not playing the ethnic card, can he possibly explain to Nigerians why Bayelsa, which has the smallest population in Nigeria and the fewest number of local government areas, has more than double the number of federal appointees measured by population and weight of responsibility than that of the next state, whilst the most populous states of Lagos and Kano were at the bottom of the representation ladder? What is the president’s response to that?

“If President Jonathan is not playing ethnic politics, why was he quick to exonerate those he called ‘my people’ in the aftermath of the October 1, 2010 bombings in Abuja?

“Did Henry Okah, who was eventually convicted of the offence in South Africa, not reveal in court that he was contacted by a high-ranking official from the presidency who told him to implicate some northerners in the bombing?

“A year later, after his highly divisive election, he told a delegation of the Ohanaeze that he believed that the only votes he got from the north were from Igbo residents in the north. Are those the words of a patriot or an ethnic bigot? This was after an election where he received nearly 100 per cent of all votes cast in the South-south and South-east states, in some cases, getting more votes than there were registered voters or even residents.

“The presidency did not respond to these facts, but chose to distort the matter in order to sweep the issues under the carpet. It may interest the president to know that Nigerians are much wiser now and will not be deceived by the antics of a drowning president and his desperate aides,” el-Rufai said.

He expressed indignation at Jonathan’s response saying, instead of responding to his allegations, Jonathan was using divisive strategies for electoral gains. The presidency announced that Jonathan fasted along with Muslims during Ramadan to show that he identified with Muslims.

“It may interest him to know that former President Olusegun Obasanjo also fasted while in office, but did not broadcast it for political gains. Incidentally, fasting goes beyond abstaining from food and drink during daylight hours; it is an intrinsic spiritual contact between man and his creator to strive for higher ideals including truthfulness, honesty and keeping promises.

“Nigeria, by the will of the people, is a secular state. But of all Nigerian leaders, no one except Jonathan makes policy proclamations from his place of worship.

“Perhaps, the irony is lost on the president, but not only is it religious politics to make policy statements before only a section of the populace, the implications of making those promises in the house of God, then refusing to fulfil them are serious,” he added.

El-Rufai who had alleged that Jonathan was the godfather of the oil thieves challenged him to respond, rather than distorting the comments he made during the radio programme.

“Can Jonathan explain why he ordered the removal of recognised maritime security officials from the creeks and handed over pipelines and oil installations security to militants? In what country does a bank employ a former bank robber to guard its vaults? Is there not a grand strategy to ease oil. theft and procure arms for the militants to use against their fatherland? Why is there no response to this issue?” el-Rufai asked.