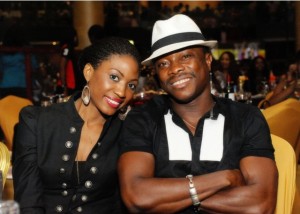 In a one on one session with national daily – Vanguard, ace comedian Julius Agwu and his wife sat down and answered personal questions about before and after their blissful wedding.

How I met my wife
I met my wife at a wedding in Port-Harcourt in 2000. She was part of the bridal train. My mind was blown away when I sighted her. Thereafter, we became friends. Somehow, we lost contact with each other and later, met again in 2002. The rest is history. We got married in 2008.

Courtship
We dated for eight years. This is because her parents insisted that she must complete her education. After her Youth Service, they insisted she had to enroll for her master’s degree program. And I kept waiting for her.
When you court your spouse, that’s when you understand yourselves better. You find out what she likes and what she doesn’t; her shortcomings as well as yours and find a way to blend with her. Some marriages are having problems today because of the inability of the couple to bring God into it. These are two people from different backgrounds coming together to live as husband and wife. I am very temperamental and my wife too is a stubborn woman. But in spite of these shortcomings, we have learnt to manage our issues.

Attraction
She’s not only beautiful, she is also intelligent. We connected immediately. She combines beauty and brain. I realise she’s something different. It’s not every lady you dated that you can propose to. Not every date can lead to marriage because God created every man and created a wife for that particular man. God also created every woman and created a husband for that woman. That two people dated does not mean that they must become husband and wife. Your prayer should be that nobody should marry your own wife or husband. That’s how we connected.

Accepting marriage proposal
From the outset, she likes me. But when I first met her, she was about 18 years and she was giving me an attitude. I wasn’t patient as I got angry. I didn’t want to beg anybody . This went on until 2002, when I lost my father and we ran into each other again. Coincidentally, that was her birthday. He got connected again. She came with her friends and we hung out that night. We exchanged our contact again and renewed our love for each other.

5 years after
It has not been easy. Marriage can be funny. When it is sweet, it is sweet, and when you quarrel with your spouse, it looks as if that is the end of the marriage. But my attitude has always been that no two marriages can be the same. That has been my style. You may quarrel, keep malice but the most important thing is that I have decided to spend the rest of my life with her, for better and for worse until death do us apart.

Advice to young couple
It’s just that whatever you do in life, you need to hold onto God. At any point, married couples need God to mediate in their marriages. Problem starts when they allow third party to interfere in their marriage. We are in an era where a lot of marriages are hitting the rock. It’s not about celebrities alone, it’s also happening in other professions. Because we are in the public eye, people easily notice when there is a crack in a marriage involving a celebrity.

Female fans
My wife understands the kind of business that I do. I have an understanding wife and I know where to draw the line. That’s the truth.

Strength of marriage
God has been the bedrock of our marriage. That understanding that we both share; understanding of each other’s temperament and shortcomings has been made possible by God.

Before I met my wife
I dated other girls before I met my wife. That’s why I said when two people dated, it does not mean that they must get married. I had one or two girl friends who were on the line then. But it did not work out for us. I prayed for God’s direction and He directed me to my wife.

What I dislike about my wife
My wife is not as loving as I would have wanted her to be. There’s what we call display of public affection, she does not give me that. That’s one thing I don’t like about her. May be, it’s because she’s an introvert. Sometimes,I get scared because of her quietness.

Love in marriage
Love is the foundation upon which marriage is built. That’s why I said earlier that it’s sweet when it’s sweet. But when you quarrel with your spouse, it looks as if you have become sworn enemies. Sometimes,hardship forms part of the reasons most marriages crash in our society. But it is only when trials set in, that husband and wife are expected to show understanding to each other.
That’s when truly love counts. If you love your spouse right from the out set,you should be able to make sacrifices. Every relationship depends on what you put into it. While I was in the university, I propounded a theory of relationship known as “PUT”. “PUT” stands for Patience, Understanding and Tolerance. These three factors must be presence in your relationship with your wife, children, parents,siblings and even with God.

I didn’t take him seriously — Wife

How we met
It was at a wedding ceremony in Port-Harcourt. When he proposed to me ,I did not take him seriously.
Stronghold of my marriage
God, and believing in each other.

How I see my husband
He can be funny but at the same time, he’s annoying. He knows how to get me annoyed.