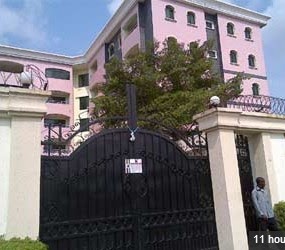 The Lagos State Government on Tuesday dismissed Dr. Orji Uzor Kalu’s claim that his property was sealed over his criticism of the recent deportation of some non-indigenes to Anambra State, saying the former Abia State governor defaulted in the payment of his Land Use Charge, an annual fee paid by all landlords for their property in Lagos State.

The property, a private residence located in Park View, Ikoyi, a highbrow area of the state, was sealed off by agents of the Lagos State government after three previous notices served on Kalu to pay the mandatory fees, failed.

A statement by the state government, however, stated that following the intervention of Governor Babatunde Fashola, the property has been re-opened and a 14-day grace period given to Kalu within which to pay the charges.

“We wish to state, for the avoidance of doubt that nothing could be further from the truth. The fact is that Mr. Orji Uzor Kalu’s property in Park View Estate, Ikoyi was distrained pursuant to Section 40 of the Revenue Administration Law of Lagos State for failure to pay the statutory annual land use charge despite three separate notices delivered to the said property.

“As a government driven by law and process, the Lagos State Government will ordinarily expect all law abiding residents to discharge their responsibilities to the state.

“If, in spite of failing to do so, Mr. Orji Uzor Kalu wants to give ethnic colouration to a routine performance of its duties by an agency of the state government, which in this case is the Land Use Charge Office, under the Ministry of Finance, he is welcome to do so.

“However it should be noted that when the issue was brought to the attention of the Governor, Tuesday evening, he directed the agency to unseal the property and that an additional 14 days grace period be given to Mr. Kalu to pay the said charge.

“It should be emphasised that notices like these are served on defaulting property owners on a regular basis who either comply or contact the Agency to raise any objections they might have to such notice. Mr. Orji Uzor Kalu, like every other citizen, must fulfil his obligation to the State,” it said.