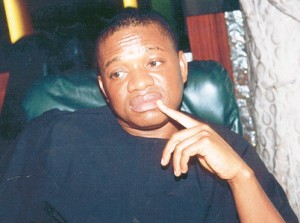 The sealing of the house may not be unconnected with Kalu’s strident criticism of Lagos State Governor, Mr. Babatunde Fashola, over the forced relocation of 72 residents of Lagos, who are of South-east origin to Anambra State.

Amnesty International has in fact put the number of those that were forcibly relocated by the Fashola administration at over 9,000.

There was speculation that the sealing might have been done in reaction to Kalu’s criticism of the forced relocation.

However, the state government has denied allegation of persecution, saying the property was sealed over Kalu’s failure to pay the statutory annual land use charge despite three separate notices.

Sources also say Fashola, on learning about the sealing off of the property, had directed that it should be reopened, while he directed the Land Use Charge agency to give Kalu an additional 14 days grace to pay the levy.

Reacting to the allegation, Fashola said he had no reason to go after. “To go after someone for freely speaking his mind? No, we’re not that kind of person.”

Kalu, had on August 10, in his column in the Saturday Sun, decried the action by the Lagos State Government, which he described as an affront to the 1999 Constitution that guarantees citizens’ rights and privileges.

“If Fashola did not know, let me tell him in plain language: his unpopular action has placed him in the darkest part of history and drawn the ire of the people. And he has not just one way of not writing himself into the book of infamy and that is to make restitution over his decision and offer unqualified apology to our people, especially the families of those deported,” Kalu wrote in his column.

Speaking to THISDAY from New York, Kalu said he was informed that his house had been sealed at about 4pm yesterday but he had no details as to why the place was sealed.

“The Lagos State Government cannot intimidate me. It is a wrong thing Fashola has done and he is pursuing the wrong person. He is not the owner of Lagos. It is the wrong strategy on the part of the government,” he said.

In another reaction to the incident, Kalu’s Special Adviser (Media), Emeka Obasi, said it was done as a revenge for the criticism by Kalu, who is the Coordinator of Njiko Igbo, a group fighting the cause of the South-east.

Obasi said the property had been there for several years and that sealing it after just two weeks of his boss criticising Fashola over the forcible relocation of the Ndigbo was an indication that there was more to it.

He added that Kalu was not the only Igbo to have suffered such fate in Lagos State “after the wicked and ungodly act of deporting legitimate residents of Lagos State.”
He said: “Why is it that it is now that the property is being sealed, barely two weeks after my boss disagreed with the action of Fashola?

“We maintain our stand and this will not distract us from fighting for the people.

“The action of the Lagos State Government remains unconstitutional because every citizen of Nigeria has a right to live in any part of the country.

“Fashola should remember that the Igbo community constitutes about 35 per cent of registered voters in Lagos State and they should be treated like they matter in the scheme of things.”

In a swift reaction, Fashola’s Special Adviser on Media, Mr. Hakeem Bello, dismissed insinuations that the closure of Kalu’s home was in connection with his criticism of the forcible relocation of some Igbos hitherto resident in Lagos.

“We wish to state, for the avoidance of doubt, that nothing could be further from the truth. The fact is that Mr. Orji Uzor Kalu’s property in Park View Estate, Ikoyi was distrained pursuant to Section 40 of the Revenue Administration Law of Lagos State for failure to pay the statutory annual land use charge despite three separate notices delivered to the said property,” Bello said.