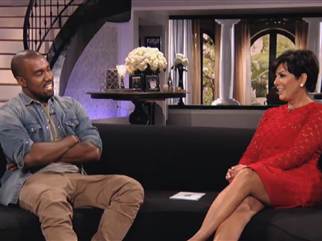 In an exclusive interview with his girlfriend’s mum, Kanye says no matter what people say, he’s staying with Kim because she makes him really happy.

“I could have people saying this is going to damage your credibility as an artist or a designer, and I say I don’t care, I love this woman. Someone could say you know, ‘When the paparazzi surround you, how could you … everyone knows you don’t like paparazzi, but why would you, why would you be with this person? And I’m saying I’m being with this person because, you know I love this person. And she’s worth it to me. She’s my joy, and she brought my new joy into the world. There’s no paparazzi, there’s no blog comment that’s going to take that joy from”

“I just dreamed about being next to her,” Kanye tells Kris of his feelings for Kim before they started dating, going on to joke, “I don’t want to start jumping up on the couch or anything” (a la Tom Cruise about Katie Holmes on “Oprah” in 2005).

Watch the videos after the cut…

Later in the interview, Kris asked Kanye what it was like to live amid the chaos of her house. Kanye said “It’s like noise at all time happening … I wasn’t used to it, and now when I’m out, you know, I try to get home early, just to be around my family.”