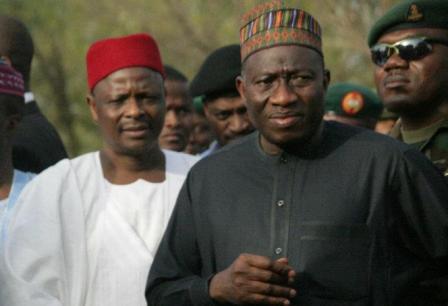 The not-so-cordial relationship between the five aggrieved northern governors and the Presidency came to the fore on Friday night when one of the governors – Rabi’u Musa Kwankwaso – of Kano State shunned President Goodluck Jonathan in Abuja, during an award/gala night organised by the National Council of Women Societies in collaboration with the Office of the First Lady.

According to reports, Gov. Kwankwaso refused to join other governors, who were on the same table with him when they all moved to the President’s table to pay homage to him; with the First Lady, Dame Patience Jonathan, Sambo and his wife, Amina, also seated at the same table with Mr. Jonathan.

Tukur and the Chairman of the PDP Governors Forum, Godswill Akpabio, were on the table beside that of the President.

Others were the acting governor of Taraba, Garba Umar, and the deputy governor of Bayelsa, John Jonah.

However, Kwankwaso and his deputy, Abdullahi Ganduje, remained on their seats.

In a more glaring display of non-recognition of the President’s presence at the event, when Kwankwaso climbed up the podium to receive his award, unlike other governors before him who also received awards on the night but moved to the President’s side for a handshake before returning to their seats, the Kano State governor simply collected his, looked the other way, stepped down from the podium and returned to his seat.