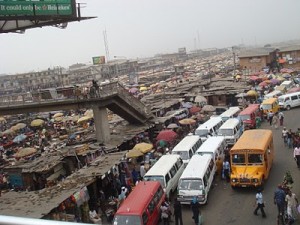 57 suspected hoodlums have been arrested in Oshodi axis of Lagos State over alleged violation of the state environmental law.

Twenty of the hoodlums are aged between 14 and 17 while 35 others are adults.

One of the suspects, Segun Akinlade, was arrested last week and arraigned before the Special Offences Court Alausa, where he was sentenced to 24 hours community service, but returned to the spot and was re-arrested.

Chairman of the Lagos Taskforce on Environmental and Special Offences Unit, Chief Superintendent of Police, CSP, Bayo Sulaiman who led the enforcement team, explained that the underage suspects would first of all be taken to the family court and that after being convicted, would be taken to remand homes for proper rehabilitation.

“The state government is determined to rid the streets of hoodlums and it wouldn’t pardon children found during the raid. We will arrest them but we (Taskforce) don’t jail children as it is speculated in some quarters.

He lamented that underage children had continued to carry out nefarious activities in Oshodi, saying that they were being groomed by the adult touts to take over from them in the future.