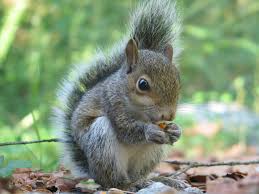 A man in Vero Beach, Fla., has been accused of assaulting his neighbor for a reason that sounds nutty: The victim kept feeding the neighborhood squirrels.

Eugene Oates, 57, was arrested Saturday for battery after he allegedly tried to force his neighbor, Ernest Willette, out of his home.

Oates was angry because Willette kept feeding peanuts to the squirrels. The shells apparently ended up on Oates’ lawn and driveway, WPBF.com reported.

At point during the squirrelly skirmish, “Oates allegedly grabbed Willette’s arm and tried to pull him outside,” TCPalm.com reported. “The squirrels could not immediately be reached.”

Willette told the responding officers that he grabbed the door frame to prevent Oates from pulling him outside. They noticed two scratches on the victim,, VeroNews.com reported.

Oates was arrested and booked, and was later released from the Indian River County jail on a $500 bond.

He’s not the only man recently accused of being a horrifically bad neighbor.

On Friday, Anthony Metcalf of Chicago was charged with attacking his neighbor and childhood friend with a chainsaw during an “alcohol-fueled” argument on the city’s Far South Side Wednesday.

And last Tuesday, an unidentified New Hampshire man was arrested after he brandished a sword and chased his neighbor down the street during a dispute, according to MyBoston.com.