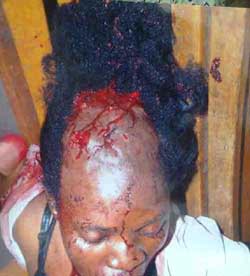 An Ikeja Magistrate Court, yesterday remanded a 43-year-old man in prison over attempted murder of his sister, Esther Erazele.

Matthew Erazele, a security man, was yesterday arraigned before Magistrate Margaret Dan-Oni, and he is facing a one-count charge of attempted murder preferred against him by the police.

The defendant was said to have accused Esther, who resides in the same house with him, of using witchcraft to stop him from getting married.

He alleged that he used to see her in his dream whenever he is with a woman that he wanted to get married to, and she used to prevent him from getting married. When he couldn’t condole her witchcraft anymore, he hit her with a hammer on the head and also twisted her neck.

The police prosecutor, Inspector Edet Okoi, told the court that the defendant committed the alleged crime on August 3, 2013, at about 8 pm,at 29, Ifekoya Street in Agege area of Lagos State.

According to him, the defendant, while inside the room with his sister used hammer to hit her head severally, and also twisted the victim’s neck, in order to strangle her.

Erazele pleaded not guilty to the charges read.

Magistrate Dan-Oni granted him bail in the sum of N200,000 with two responsible sureties, who are gainfully employed, resident in Lagos State. One of the sureties must be a clergy man while one must reside in his property and show evidence of tax payment and address verified.

The case was adjourned to October 2, 2013, for mention, while the magistrate ordered that the defendant be remanded in Kirikiri prison, pending when he is able to meet his bail conditions.