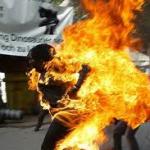 A father of four, Mr. Sylvester Ezema, of Akpa Edem, Nsukka, Enugu State was on Saturday set ablaze by one Sunday Ugwuoke of the same community.

The incident, which happened in the early hours of morning has created much confusion and tension in the community.

A source who pleaded anonymity told DailyPost that the victim was ambushed around 5:30 a.m when he came out to urinate.

According to him, “Ugwuoke on sighting Ezema, poured petrol on him before setting him ablaze. After the heinous act, he ran away and is still at large till now”.

He further revealed that the shouting of the victim attracted sympathizers, who rushed him to Chukwudi Hospital Nsukka, where he later died.

Meanwhile, Ugwuoke was alleged to have told some of his friends that he had warned the victim several times to stop having amorous relationship with his mother.

Efforts by our correspondent to get reactions from the deceased’s family proved abortive as they declined comment.

When contacted, the Enugu State Police Public Relation Officer, Ebere Amarizu, DSP, confirmed the incident and said that police had started investigations to unravel the circumstances surrounding the incident.

“The matter has been reported to the police. After investigations, those indicted will be arrested and prosecuted.

“The body of the deceased has been deposited at the Bishop Shanahan Hospital Nsukka for post mortem examination”, Amaraizu stated.