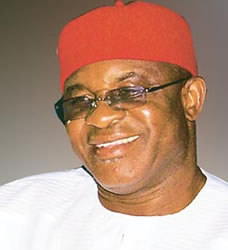 President of Nigeria’s Senate David Mark, has described last Sunday’s killing of 56 persons in Konduga village of Borno State as not only inhuman but also barbaric.

Mark who charged security operatives to review strategies in fighting the insurgents condemned the cold blooded murder of the Islamic worshippers, saying “nothing can be so cruel and callous than this crime against humanity”.

In a statement through his Chief Press Secretary, Paul Mumeh, Mark urged security operatives to review strategies for more effective results and asked the perpetrators to have a rethink.

“The continued violence, killing of innocent and unarmed people and destruction of property by the insurgents cannot be justified or contribute towards achieving whatever their objectives may be.

”There is need for the perpetrators and their financiers to make a u- turn and embrace peace. It is only a mad man that throws stone into the market place or village square without thinking about the consequences .
The Federal government has open windows for peace and dialogue. These people should take advantage of it and end this violence,” Mark said.

He noted that no religion preaches violence and hatred, saying the insurgents must not hide under the guise of religion to commit heinous crimes.

“I know for a fact that no religion preaches violence or hatred. Every religion preaches peace and indeed harmonious relationship. So, nobody should hide under any guise to commit crime . This is crime against humanity,” he added.

While sympathizing with the government and people of Borno state, especially the victims of the violent attacks, Mark pleaded with security operatives not to be deterred by the unabating attacks but be further spurred to protect lives and property especially in the crises pruned areas.