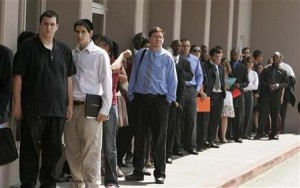 A measure of Americans who applied for unemployment benefits over the past month has fallen to its lowest level in almost six years, signalling fewer layoffs.

The Labour Department said Thursday that the average number of people who applied for benefits over the past four weeks dropped 6,250 to 335,500 – the lowest level since November 2007.

Weekly applications for unemployment aid increased by 5,000 last week to a seasonally adjusted 333,000, up only slightly from the previous week’s five-year low.

The decrease in the four-week average points to an encouraging trend for the job market. Applications, which are a proxy for layoffs, have fallen more than 10 per cent since the start of the year. That’s helped drive net job gains this year, which show the number of people hired minus the number who lose or quit their jobs.

Economists were hopeful the drop in layoffs could lead to some strengthening in the job market, with BMO Capital Markets senior economist Jennifer Lee calling the decline in the four-week moving average “very good news indeed”.

But Bricklin Dwyer, an economist at BNP Paribas, cautioned that the unemployment claims figures had so far signalled only modest healing in the labour market.

Layoffs have averaged 1.5 million a month this year through June, even fewer than the 1.77 million averaged in the pre-recession year of 2006.

But total hiring in June actually declined 289,000 to 4.2 million, the latest data available. That’s down from a year earlier and the biggest one-month drop in hiring since June 2010.

The unemployment rate fell in July to a four-year low of 7.4 per cent in July, down from 7.6 per cent in June, but that was still well above the 5 per cent to 6 per cent associated with a normal economy.