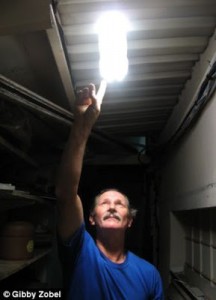 A Brazilian mechanic has invented a way of lighting bulbs without electricity- using plastic bottles filled up with water and a splash of bleach.

The secret: Adding two capfuls of bleach to a bottle of water stops it from turning green when exposed to sunlight. He then drills a hole in a roof tile and pushes the filled bottle in from below. He keeps the bottle in place with polyester resin, which waterproofs the ‘window’ in his roof. More photos after the cut:

During a power shortage, it was his boss that first suggested the use of a plastic bottle filled with water as a lens to focus the sun’s rays on dry grass and to light fires in case of an emergency. It was after then that Mr. Moser developed the concept into his Moser Light.

In a statement to the BBC World Service, he was quoted as saying: ‘It’s a divine light. God gave the sun to everyone, and light is for everyone. Whoever wants it saves money. You can’t get an electric shock from it, and it doesn’t cost a penny.”

Wow..!!! The man should patent his invention immediately and not forget to fly to Nigeria asap too…we have plenty of water bottles and sunlight!!!