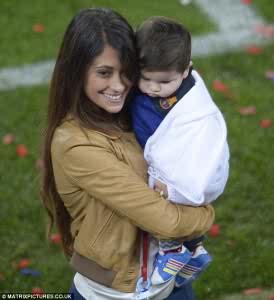 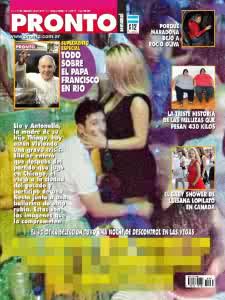 An Argentinean magazine has published a photograph of 4 times World player of the year and Barcelona talisman Lionel Messi with a blonde woman in Las Vegas.

‘Pronto’ splashed the picture on their front page with the headline ‘Night of chaos in Las Vegas.’

The tabloid claims the picture is threatening the relationship between Messi and girlfriend Antonella Roccuzzo, who is the mother of his nine-month-old son Thiago.

According to the publication Pronto, Roccuzzo found out about the incident while on holiday in Ibiza with Messi’s teammate Cesc Fabregas and his girlfriend Daniella Semaan.

The magazine claims Messi, 26, ‘travelled to the City of Sin and participated in a party next to a blonde strippér’ after playing in an exhibition match in Chicago on July 6.

Na so Messi, I always knew you had that fire in you!!!