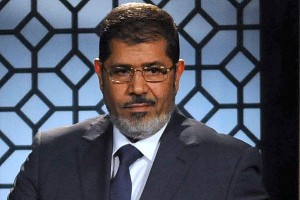 Ousted president of Egypt Mohamed Morsi was Monday accused of complicity in the deaths and torture of protesters outside his presidential palace in late 2012, judicial sources said.

He already stands accused of crimes related to his 2011 escape from prison, and the new allegations mean his current detention will be extended by 15 days started next week.

In December 2012, thousands of demonstrators gathered in front of the presidential palace in Cairo to protest against a presidential decree that expanded Morsi’s powers and an Islamist-drafted constitution.

Five people died in the clashes between Morsi’s backers and opponents in Cairo on December 5 when rival demonstrations turned violent.

An Egyptian court last month ordered Morsi’s detention for questioning over alleged ties with Palestinian militants in prison breaks and attacks on police.

The first accusation relates to a prison break in early 2011, in which Morsi and other political inmates escaped during the revolt against strongman Hosni Mubarak.

An Egyptian court said on June 23 that the Palestinian Islamist movement Hamas, and Lebanon’s Hezbollah had been involved in the prison break at the Wadi Natrun jail, north west of the capital.

At the time, Morsi said he had escaped along with 33 other key members of his Muslim Brotherhood movement after residents opened the doors for them.

Security sources said thousands of prisoners overpowered their guards at the Wadi Natrun before escaping.

Other top Brotherhood figures are due to stand trial on August 25 on charges of inciting the shootings of protesters outside their headquarters on June 30.