Robert Mugabe has launched a stinging attack on his opposition rivals in his first public speech since he won Zimbabwe’s disputed presidential election. 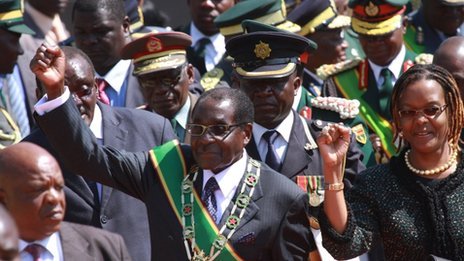 Rejecting PM Morgan Tsvangirai’s claims the vote was stolen, he said those against him could “go hang”.

The party has lodged a legal challenge against the result of the “stolen election”, demanding it be rerun.

Mr Mugabe won 61% of the vote in the election on 31 July, while Mr Tsvangirai came second with 35% and Welshman Ncube third with 3%, according to official results.

The president’s Zanu-PF party also gained a parliamentary majority of more than two-thirds, winning 160 of the 210 seats.

In his Heroes’ Day speech, which dealt with a series of national issues, Mr Mugabe focused at one point on his election victory and called for celebrations.

“Those who lost elections may commit suicide if they so wish. Even if they die, dogs will not eat their flesh,” he said.

He did not directly name Mr Tsvangirai, at all during the speech. Zimbabwe’s Western detractors had been “put to shame”, he added. “Never will we go back on our victory.”

Non-governmental organisations had been used to rig elections in 2008, he added, but Zanu-PF had never stopped planning since then and had “buried thieves in our midst”.

Mr Tsvangirai won the first round of the 2008 presidential vote but official results said he had failed to win outright. He later pulled out of the second round because of attacks on his supporters.