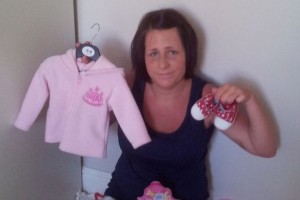 Sarah said: “I couldn’t understand it when the midwife said it was a boy.

“All our scans had confirmed it was a girl and I had everything prepared in pink.

“We had picked her name, Lily-Mae, and had the room decorated with her name stencilled across the pink feature wall.

“We even had personalised blankets as gifts from family and friends.”

She added: “We looked at each other and couldn’t believe that Lily-Mae was actually a boy.”

Sarah and Lee, of Blyth, Northumberland, wanted to know the sex of their first child and at her 20-week-scan discovered it was a girl.

“It was my first baby and so we had to buy all the essentials” said Sarah.

“I wanted everything to be perfect for her so that she would want for nothing. Being prepared was my main concern and seeing as I knew I was having a girl I didn’t see the harm in buying everything in pink.”

Lee said: “There was so much to change and friends and family have been so helpful.

“We had bought most of the clothes from ASDA and they were fantastic and let us exchange everything.

“But we still have a lot of pink things that we can’t return and so we’re just keeping them and hoping, at some stage, we have a girl.

Since Joseph’s arrival in June Lee has been busy decorating.

“The nursery is now redecorated with a Monsters Inc. theme so we think Joseph will prefer that to a pink room” he said.