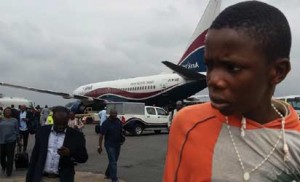 Pilot of the Arik Air aircraft which took 13-year-old boy, Master Daniel Ohikena to Lagos from Benin, in its main wheel well may be punished by the Nigerian Civil Aviation Authority, NCAA, for alleged professional negligence while on duty, reports have said.

Daniel had beaten airport security to hide in the wheel well of the Arik aircraft he thought was flying to the United States, but officials of Arik Air found him after the aircraft landed in Lagos, and handed him over to airport security.

This came as FAAN, introduced new security measures in all the nation’s airports to prevent the re-occurrence of runway incursions, especially those without perimeter fences.
The apprehended teenager who stowed from Benin.

Earlier comments on the issue have blamed porous airport security for the incident, but indications have now emerged the pilot may be sanctioned over the incident, with Director-General of NCAA, Mr. Fola Akinkuotu, said to have set up a committee to investigate the incident.

Having questioned the teenager’s mother and ascertained his motive, with many organisations sticking up for the teenager – a group supporting Osun State Governor, Rauf Aregbesola, DeRaufs, has even offered the teen scholarship; one would expect the boy to be released to his family, but it was learnt that the teenager is still being held in the custody of the Department of State Security, DSS, five days after he was arrested at MMA, Lagos. Security sources however said it would be wrong to release him, as the case was still under investigation.

The committee which was set up, Tuesday, sat up till yesterday probing the stowaway incident and alleged professional negligence of the pilot of the Arik Air’s aircraft.

According to a source who spoke to Vanguard on the condition of anonymity, the panel was set up to handle the issue professionally especially when it was confirmed that some passengers onboard alerted the cabin crew of spotting a strange element who passed under the aircraft, but who was not seen coming out of the the plane in Lagos.

Besides, it was confirmed that the cabin crew informed the pilot of the development and rather than handle the issue professionally, he ignored the information even though he contacted the control tower on the issue.

The source alleged that it was already established that the pilot was in a hurry to airlift the passengers to Lagos and airlift other passengers to Abuja Airport same day.

“The committee has already established that the pilot didn’t handle the issue professionally because as a professional who was contacted on such danger, the onus was on him to abort the flight and ensure total screening of the aircraft and the pilot, but he didn’t do that. Rather, he wanted to beat the time and pick up passengers in Lagos. That was unprofessional. If he’s found wanting, NCAA will deal with him according to the law in the sector. We need to establish what really happened. That was why the committee was inaugurated by the Director-General,” the source said.