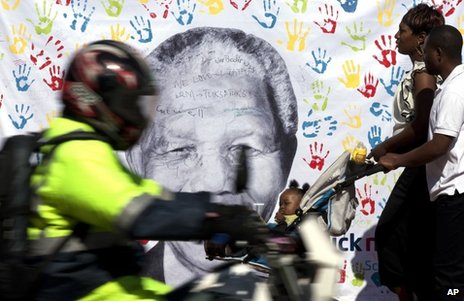 The state of the 95-year-old is “still critical but stable”, according to a statement from the South African president’s office.

He remains in hospital in Pretoria two-and-a-half months after being admitted with a recurring lung infection.

The statement largely squares with comments from members of his family.

“Critical but stable” is the phrase used by the government for weeks now, the BBC’s Mike Wooldridge reports from Johannesburg.

However, Saturday’s statement does provide some fresh insight into the precariousness of the health of the global icon and the reserves he still appears able to call upon, our correspondent adds.

The statement said doctors were still working hard to bring about a turnaround in his health and, as a result of medical interventions, his condition tended to stabilise.

President Jacob Zuma, who is travelling to Malaysia on an official visit, urged the country to continue praying for Mr Mandela and to keep him in their thoughts at all times.

Mr Mandela, who stepped down as the country’s first black president in 1999, entered hospital on 8 June.