A cow in New Zealand has delivered a deformed calf who has two bodies, four ears, and eight legs on Monday.

A veterinarian of dairy farm, Neil Davy, who delivered the stillborn calf , told the website NZ Farmer that if he hadn’t been there, the mother cow would have surely died. 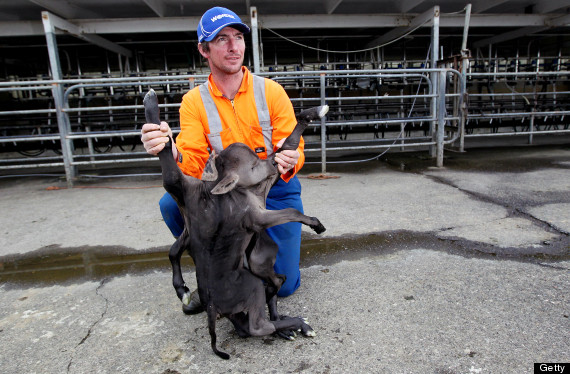 “It was hard going,” Davy told the website, “I was up to my elbows in lube and calf goo, sweat coming off my forehead. It’s not nice to see a cow in distress.”

Davy told the site that he’d originally thought he was delivering twins. Close enough: identical twins come from one egg that divides, and veterinarian Jonathan Spencer told NZ Farmer that Davy’s calf “[seems] like an incomplete divide of an egg.”

Other odd deformities have been known to occur in cattle.

In 2012, a calf with an extra pair of legs was born in Switzerland. Although vets didn’t initially think the six-legged cow had much chance of survival, the calf seemed to be doing just fine at two months old.

In January 2011, a two-headed cow was born in Georgia. The farmer said that the animal ate with both heads.