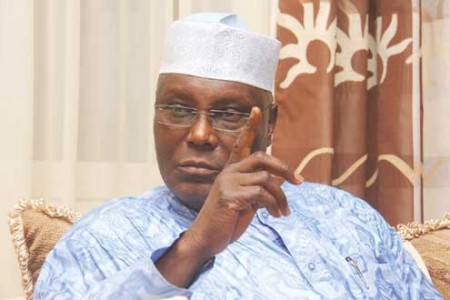 Information Nigeria reports that both heavy weight politicians in their own rights are major stakeholders in the PDM founded by late General Shehu Musa Yar’Adua.

Anenih, in a statement titled: “Our PDM is not a Political Party”, said the movement, which worked with other political associations to form the PDP in 1998 remained an integral part of the ruling PDP and urged concerned members to treat the registration as a political trickery which will not stand the test of time.

But Atiku, in a statement by his spokesman Garba Shehu, said he believes in the right of freedom of association of Nigerians which is guaranteed by the constitution.

The former VP, who recalled the journey of the PDM towards gaining recognition as a political party, noted that even when Shehu Musa Yar’Adua was alive, PDM never operated as a regimented organisation like the police or the army.

“Don’t also forget the fact that this is not the first time that the PDM had sought registration”, the statement said.

“They sought to register as Peoples Front, PF under the Babangida Presidency but this was denied them. They tried to do this under Abacha but instead, parties described as ‘the five leprous fingers’ were registered.

“He called many of the then PDM members, including Chief Anenih to the PDP in 1998, and they agreed to come, several others including the Asiwaju Bola Tinubu chose the other parties such as the then Alliance for Democracy, AD and the defunct All Peoples Party, APP. So they, as PDM members were really never sworn to an oath, to belong to only one political party,” the former VP’s media aide said.

“So while he, Atiku and Chief Anenih have made the choice of remaining as members of the PDP, neither of them reserves the right to take away from a fellow citizen, his right of freedom of association as accorded by the constitution of the Federal Republic of Nigeria. Atiku equally believes that it is time for some of them, the elders in the polity to allow our younger members to express themselves.

“We can advise them without imposing our political views on them. It is by this spirit that we can guide and grow the next generation not by hindering them,” Shehu said in the statement.