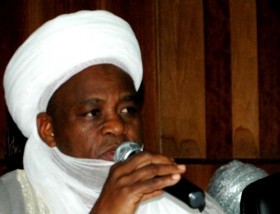 The Northern States Governors Forum has congratulated the Sultan of Sokoto, Alhaji Sa’ad Abubakar III, who attained 57 years of age at the weekend.

In a statement issued on Sunday in Minna by his Chief Press Secretary, Danladi Ndayebo the Chairman of the forum and Governor of Niger, Dr Babangida Aliyu, described the sultan as a bridge builder and a man of peace.

He said that the sultan’s reign had ensured progress and modernisation to the caliphate as well as the length and breadth of the nation.

“The Sultan ensured that crisis whether sectarian or otherwise, is a rare occurrence in the Caliphate and even beyond, owing to his fatherly role,” the statement said.

It stated that Sultan Sa’ad’s enviable stature as a bridge builder had helped to bring together his people irrespective of their differences, thereby advancing the course of peace, unity and positive development in all parts of the country.

The forum prayed God to grant the Sultan excellent health, courage and many more years of selfless service to Nigeria and humanity. (NAN)