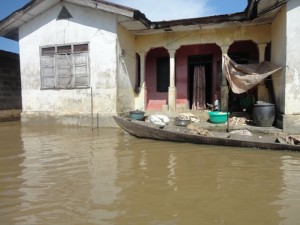 Residents of the commercial city of Onitsha, Anambra State are gearing up for this year’s floods which the Nigeria Emergency Management Agency (NEMA) has predicted will be hitting the South Eastern part of the country very soon. Many of the residents who wouldn’t want to be caught unawares like they were last year have started buying canoes, dredging water channels and erecting barriers to tackle the disaster when it eventually comes.

Speaking on their preparation for the impending flood, Personnel Manager, Dozzy Group of Companies, located at the Habour Industrial Estate, Mr. Chima Akuchi, said there was no word appropriate to qualify the level of devastation they faced during the last year flood incident.

He said that the pains they were made to bear by the flood was like the pains of Boko Haram victims, noting that the company apart from losing fortune to the natural disaster also contributed to help the victims of the flood.

He said the company is doing something to ensure it is not at the receiving end this time around. “We are taking proactive measures to make sure we protect our factory from flooding by building some pillars around the company. Last year’s flooding took us by surprise but this year, it will not happen to us again by surprise because we have been monitoring the warnings by the Nigeria Metrological Agency, NIMET about the impending flood. So for us at Dozzy Group of companies, we shall survive it with total carefulness and adherence to warnings from the relevant agencies”

Chairman of Poko Bros Group of Companies, Chief Paul Okonkwo said his firm was the worst hit in last year’s flood, adding that he lost almost everything he labored for in his life including his company at the same Habour Industrial Estate as well as hotels in Asaba and Aguleri.

Chief Okonkwo said he is not taking any chances to make sure the companies survived this year’s impending flood, stressing, “we have made some good steps all in a view to making sure that the flood does not take us by surprise and this we did by building some drainages around our factories and opening some blocked bridges to be able to allow free flow of water. We are also building extra water channels to push the waters back to the right places instead of emptying into our factories”

He called on the federal and state governments to come to their aid by opening up some of the blocked drainages in various parts of the estate as well as build some new water resistant drainages around the estate to be able to contain the devastation of the flood, while also calling on the residents of Onitsha and its environs to develop the culture of opening up drainages instead of throwing refuse into them.

Both the federal and Anambra state governments in an apparent effort to checkmate the effects of the impending flood this year, apart from proactive measures of opening the major waterways in the state have also started mounting bill boards in various major cities of the state.

Apart from the visible bill boards in various major cities of Awka, Nnewi and Onitsha mounted by the Anambra State government, it was further gathered that the work at the dredging of the Nwangelle River awarded to Benejaff Construction company by the federal government is ongoing and at the completion stage.

Minister of Environment, Hajia Hadiza Malafia while perfecting the contract papers had told Sunday Sun that the contract was one of the federal government’s intervention programmes, aimed at checkmating environmental challenges across the country especially the erosion and flood prone areas like the South East zone.

Hajia Mailafia said that the Sacamori-Nwangele erosion control within the commercial city of Onitsha will gulp over N1billion before it could give the needed control over erosion and other natural disasters including the impending flood as predicted by NIMET.

Mrs. Mailafia also cautioned Nigerians against frustrating efforts of state and federal governments to rebuild a clean and healthy environment, adding that the residents of different parts of the country ravaged by erosion and floods have always contributed to such disasters.

She lamented that indiscriminate building of houses and other structures had continued to undermine government projects and remained serious threat to safe and healthy environment and said the project was one of the fifteen erosion projects awarded in the South-East and thanked Governor Obi for ensuring effective supervision of the project.