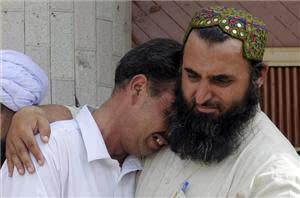 At least 37 people have been killed in southwest Pakistan, including several senior police officers, in a suicide bomber attack at the funeral of a policeman in the city of Quetta.

Several senior police officers attending the funeral of a fellow policeman who was killed earlier on Thursday, were killed in the explosion.

Among the dead were Deputy Inspector General Fayyaz Sumbal, and Deputy Superintendent of Police Headquarters, Shamsuddin.

Some of the dead and wounded were children attending the funeral, he said.

The suicide bomber was wearing a jacked packed with ball bearings and shrapnel, said a member of the bomb squad.

According to television reports, the bomb exploded outside a mosque where the funeral of station house officer Mohibullah was being held.

“We are collecting more details. We have declared an emergency,” said Selim Shehwani, a police officer.

Policeman Mohammad Hafiz spoke of his horror after the explosion.

“I was inside the mosque and we were lining up for the funeral prayers when  a big blast took place. I came out and saw injured and dead bodies lying on the ground,” Hafiz told reporters.

“I have no words to explain what I’ve seen. It was horrible.”

The blast capped a bloody Ramadan in Pakistan, where at least 11 attacks have killed more than 90 people during the month.

It was not immediately clear who was responsible for the attack.