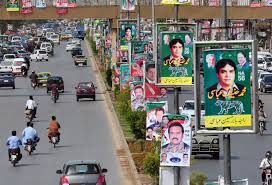 Army will be deployed at polling stations in the volatile city of Karachi, Pakistan, where two political parties announced their boycott of by-election scheduled for Thursday.

The by-elections were scheduled in 42 electoral constituencies for the provincial and national assemblies in the country after polling was called off in those seats because of the law and order situation and procedural or constitutional delays.

In Karachi, sources said, soldiers would be deployed at the polling stations to prevent any untoward situation. Two provincial and one national assembly seats were lying vacant after the elections were put on hold there on May 11, when the nation went to polls.

At the National Assembly seat No 254, polling was deferred after a National Awami Party (NAP) candidate was gunned down in eastern region.

Saddiq Zaman Khattak was ambushed by unknown assailants when he was coming out of a mosque after offering his Friday prayers along with his child.

An independent candidate Shakeel Ahmed was also killed just before the election day in a shootout between the rival groups.

Karachi witnessed a series of attacks on secular parties by Taliban and other militant groups before May 11 elections.

Altaf Hussain, the MQM leader in exile, in his overnight address to his party workers urged the election authorities to hold fair, free and impartial elections. He said unfortunate incidents occurred in the national elections when armed groups occupied the polling stations in Mirpurkhas, a city in central Sindh. He said if the authorities failed to hold fair elections then the people would exploit their right of protest.

The deployment of army was demanded by Pakistan Tehreeke Insaf (PTI).

Meanwhile, radical Jamate Islami and secular ANP announced their boycott at the different constituencies in this city.

A JI spokesman said that the party would boycott all the three seats of provincial and national assembly, whereas ANP would boycott elections throughout the Sindh province.