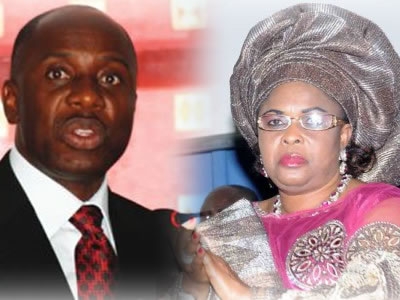 The First Lady, Dame Patience Jonathan on Monday appealed that her name should not be used to heat up the nation’s polity.

This is contained in a statement released in Abuja and signed by Mrs Ayo Adesugba, a Director of Information in the presidency.

According to the statement, reports that she snubbed the deputy governor on her arrival in Port Harcourt were false.

”It is important to set the record straight in order to prevent the public from being misled. The First Lady arrived in Rivers State yesterday for a private visit, to make arrangements for the burial of her late mother with members of her extended family.

”It should be clear to all that for quite some time now, the First Lady has refrained from commenting on issues relating to the politics of Rivers State.

”Dame Patience does not want her name to be used to heat up the polity. We therefore urge that the name of the First Lady be left out of the politics in Rivers State,” the statement stated.

The statement also hinted that all might still not be well between the First Lady and Governor Rotimi Amaechi just as it stated that those who deserve respect must learn to give it first.

The statement said, “It should be noted that while several groups and individuals from across the country came to condole the First Lady and Mr. president on the death of her mother, no official of Rivers State government deemed it fit to pay the first family condolence visit, yet they claimed the first lady is a daughter of Rivers State. He who must go to equity must go with clean hands. They should learn to give respect to those who deserve respect so that they too can earn respect.”

The statement added that the president’s wife should be ”free to visit the state of her birth and bears no grudge against anyone as she is an individual who continues to tirelessly advocate for peace and harmony in Nigeria.” (NAN)