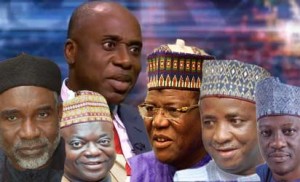 Seven of the 23 governors of the People’;s Democratic Party, PDP has reportedly decided to float a new party, the Voice of the People, VOP, compounding the troubles facing the PDP.

The application for registration by the new party, it was learnt at the weekend, has been filed with the Independent National Electoral Commission, which is processing it. A source in INEC contacted on the development, yesterday, said he was unable to confirm the veracity or the stage of the application.
The party, it was learnt, is receiving the patronage of several chieftains of the PDP.

The seven governors alleged to be behind the new party include all five Northern governors that have engaged in a series of consultation with eminent statesmen, including former heads of state. The five governors are Murtala Nyako of Adamawa ; Rabiu Kwankwanso of Kano; Aliyu Wamakko of Sokoto; Sule Lamido of Jigawa and Babangida Aliyu of Niger State. The five governors are being joined in the rebellion against the PDP by Governor Abdulfatah Ahmed of Kwara and Rotimi Amaechi of Rivers State, Vanguard reports.

Another governor is also sympathetic to the proposed VOP, but his identity could not be confirmed as at weekend. The inclinations of Speaker Aminu Waziri Tambuwal towards the new party have also not been confirmed though it was learnt that he has been approached.

There were indications that last Friday’s private meeting between Governor Kwankwaso and President Goodluck Jonathan was a last minute bid to stop the governor and his colleagues from the rebellion, but now it seems a little too late.

Though associates of Speaker Tambuwal in the House of Representatives claimed ignorance of his involvement or knowledge of the new party, there were nevertheless suspicions that the involvement of Governor Wamakko could inevitably lead the speaker into the emerging party.

Speaker Tambuwal has been severally flayed by some PDP associates for his close ties with opposition political parties.

The decision of the governors to float a party instead of teaming up with the All Progressives Congress, APC, it was gathered, flowed from deep suspicions between the governors and some of the promoters of the APC.

One of the governors involved in the new party had told Vanguard that General Muhammadu Buhari and Mallam Nasir El-Rufai who are among the champions of the APC were missing when activists fought for democracy during military rule. [Vanguard]