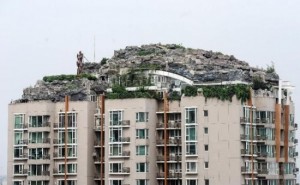 Wouldn’t it be great if you could retreat somewhere quiet and get away from it all, without actually leaving your home? That’s probably what Zhang Biqing, a former government adviser turned successful entrepreneur, thought when he decided to build his dream mountain villa at the top of a 26-floor apartment building in Beijing’s upscale Park View estate. During the six years it took to complete, residents complained about the infernal construction noise, but after seeing the enormity of the complex covering the entire top of their building, they began to worry about structural damage. The mountain in which Biqing’s villa appears to be carved may be fake, but the materials used to make it are reportedly pretty heavy as well, and threaten to weaken the residential building’s resistance. It turns out the whole rooftop project is illegal, as Zhang never received the necessary planning permission for his extreme dwelling, yet no one ever bothered him about it until Chinese newspapers recently covered the topic sparking public outrage.

Apparently, Zhang Biqing, who prefers to be called Professor Zhang, is a very well connected character. According to the South China Morning Post, he is “a doctor of traditional Chinese medicine and former member of a district People’s Political Consultative Conference who owns a national chain of acupuncture clinics”. Confronted by reporters about his housing issue and his neighbors’ complaints, the businessman said: “Since I dare to live here, I am not worried about complaints.” Other local newspapers reported that residents who dared complain about Biqing’s illegal structure have suffered harassment and threats from the owner. One 77-year-old man has allegedly been beaten by Zhang a number of times and eventually forced to move.

The rooftop mountain complex features real trees and shrubbery, a series of walkways and giant ornaments. It’s pretty impressive too look at. Unfortunately for Zhang, it’s not going to be around for much longer. The recent press coverage made his audacity too difficult to ignore and Beijing officials have decided to act. They have given the Professor 15 days to tear down his home, or they will do it for him. 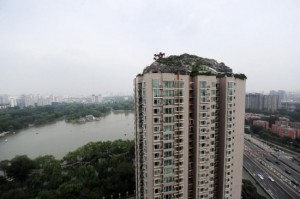