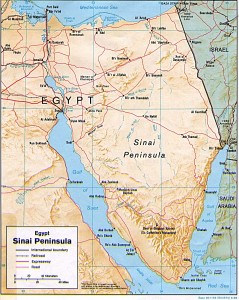 Violence continues in Egypt as gunmen, Friday, killed a police officer in Egypt’s restive Sinai peninsula, according to the Interior Ministry.

The riot police officer was shot in the chest on Friday while on patrol in the city of El-Arish, the ministry said in a statement released on Saturday.

Attacks against security forces on the peninsula have increased since a July 3 military coup deposed President Mohamed Morsi. Since then, his supporters have been organising regular protests calling for his return.

Meanwhile, the Health Ministry raised the toll in Friday’s violence to eight people killed and 221 injured, most of them in clashes between Morsi supporters and local residents.

Those killed included two police officers shot in a drive-by shooting which targeted their police station in Cairo.

Violence in Egypt peaked on August 14 when police, backed by snipers and bulldozers, attacked two Muslim Brotherhood-led sit-ins in the capital.

The move caused days of nationwide violence that has killed hundreds of people, most of them Morsi’s supporters.

Supporters of the deposed president have shown their commitment to their cause, but the government will continue on the ‘restoration’ path it has mapped out for Egypt.

Egypt’s ambassador to Nigeria, Ashraf Salama, Friday said, fresh elections that would usher in a post Mohammed Morsi era will hold in March 2014, adding that, with the removal of Morsi, the country is ready for a constitutional amendment that would lead to fresh democratic elections.

Speaking on the new road map to democratic elections, the Egyptian envoy said, “a panel of 10 jurists have finished working on the proposed amendments to the constitution. A 50-member committee representing Egyptians from all walks of life will be formed in the next few days to discuss and review those amendments and then present them in a referendum which is due to be held after 60 days from the date of the formation of the committee.”

He added that the amendment process will pave the way for the election of a new parliament followed by presidential elections in march next year.

The envoy also accused Muslim Brotherhood of not responding to the roadmap put in place by the interim government to return Egypt to democratic governance.

”Despite the continuous effort by the government and other regional and international mediators to convince the Muslim Brotherhood to evacuate the sit-ins peacefully and join the political process outlined by the roadmap for the good of the nation, the leadership of the Brotherhood refused to respond positively to those efforts counting on violence as its winning card to achieve political gains,” Salama said.