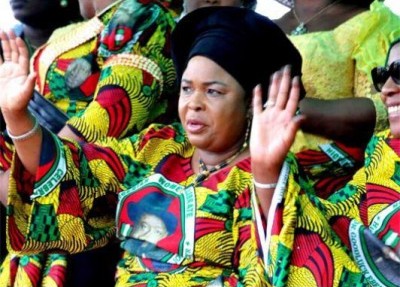 The Presidency has berated the All Progressives Congress (APC) for kicking against the recent peace rally organized by National Council of Women Societies (NCWS) in conjunction with office of the First Lady, Dame Patience Jonathan.

The rally which held at the Eagles Square in Abuja on Thursday, August 15, was used to acknowledge the role of women in peace initiatives of government and also to celebrate the appointment of women into key positions in the current administration.

The APC, had while condemning the rally, urged the Independent National Electoral Commission (INEC) to sanction Mrs. Jonathan for turning the rally into a political campaign for President Goodluck Jonathan’s re-election in 2015.

But Presidency, angered by the condemnation of the rally by APC’s interim national publicity secretary, Alhaji Lai Mohammed, stated that he not only dampened the mood of the women with the insinuation that there is nothing to celebrate, but went on to accuse the first lady of starting an early campaign for the 2015 presidential elections.

In a statement sent via email to journalists, Godwin Akpovie, Special Assistant, Political, in the office of the Political Adviser to the President, Alhaji Ahmed Gulak, invited citizens to examine what the party considered a “shameful show of the First Lady.”

“According to Mohammed, it is ‘shameful’ for Mr President to have fulfilled the 35 per cent representation in his cabinet he promised the women during his 2011 electioneering campaign. The 13 women ministers in the 42-man cabinet are holding sensitive ministries like finance, petroleum, aviation, information communication technology, defence, power, foreign affairs, among others.

“Talking about the early campaign for 2015, can Lai Mohammed extract any political statement uttered by the First Lady at the rally? As everybody knows by now, the First Lady used the occasion to call on the legislature to insert in the Nigerian Constitution the 35 per cent affirmative action for women which will then compel any administration to adhere to this provision and free the women from the discretion, pleasure or otherwise of successive presidents. Would that not be a lasting legacy if passed by the National Assembly? That is what he calls campaigning and wants the Independent National Electoral Commission (INEC) to sanction the First Lady for.”

“If there is any group that should be sanctioned, it is Lai Mohammed and his party because they have refused to stop campaigning since the end of the 2011 elections.

“The defunct Action Congress of Nigeria (ACN) and other parties that formed the APC tried to hoodwink Nigerians by staging rallies round the whole country in the name of a so-called consultation on merger.”