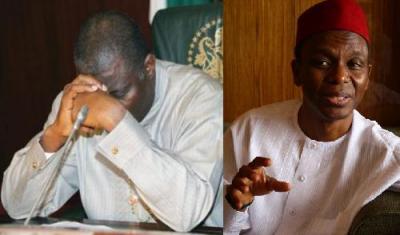 The Presidency has lashed out at former Minister of the Federal Capital Territory, FCT, and now deputy national secretary of the All Progressives Congress, APC, Nasir El-Rufai, following his allegation that President Goodluck Jonathan is playing ethnic and religious politics.

The presidency berated El-Rufai calling him a well-known liar whose comments about the President are “untrue” and a better description of the former minister.

“That El-Rufai is not above lying to the media to achieve his political objective was proven in Segun Adeniyi’s book, ‘Power, Politics and Death’ when El-Rufai was quoted to have confessed in the presence of multiple witnesses who are still alive today that ‘There was no cabal, we created the myth to neutralize Turai’. El-Rufai sold Nigerians the dummy of a Turai cabal which was a lie used to further his own political ends,” the statement by Special Adviser to the President on Media and Publicity, Dr. Reuben Abati, said.

“In any case, we have a record of what El-Rufai truly thinks of President Jonathan from the leaked secret diplomatic memo from the U.S. embassy in Abuja which revealed that just before the April 2007 Presidential election El-Rufai had told the then U.S. ambassador to Nigeria that the then Vice Presidential candidate, Dr. Goodluck Jonathan, was ‘clean and honest’”, Abati added.

El-Rufai, who was Guest of the Week in Liberty Radio Kaduna’s programme weekend, accused President Jonathan of stirring religious and ethnic sentiments whenever he was confronted with serious national issues.

“It is the political strategy of Jonathan to always use ethnicity and religion whenever there is a problem.

“Whenever there is a big issue about excess crude account or subsidy issue, they bring this issue of ethnicity and religion”, the APC chieftain was quoted as saying.

But the presidency dismissed the allegations against Mr. Jonathan and cited several instances to prove the President’s neutrality in matters of religion and ethnicity.

“For instance, the Muslim Ummah just emerged from the Ramadan fast and the President, though a Christian, joined them in fasting and severally broke the fast with Muslims at the Presidential Villa,” the statement by Mr. Abati said.

“Also, in the history of the existence of Nigeria as a nation, no leader has spent the quantum of funds that President Jonathan has spent on education specifically tailored for Islamic itinerant scholars known as the almajiri. In the composition of his cabinet, the President has appointed Muslims into sensitive positions and ensured a balance that has been commended by many in the Islamic fold.

“But it is most curious that this allegation is coming from Nasir El-Rufai, a man who profaned the name of Jesus Christ on Twitter by tweeting a joke which is too indecent to mention in the presence of civilized persons. This same El-Rufai is the same man who in June of last year claimed that Christians were behind the bombings of their own churches rather than terrorists and were doing this to further a Christian agenda.”

The statement also accused El-Rufai of being unstable in his earlier claims about former military Head of State, General Muhammadu Buhari (rtd), who he once described as “perpetually unelectable”.

“It is only a measure of his inconsistency that El-Rufai is today accusing the Presidency of being afraid of General Muhammadu Buhari whom the same El-Rufai said was ‘perpetually unelectable’”, the statement said.

“In fact, the accusation El-Rufai is now making against the President is precisely the same accusation he made against General Muhammadu Buhari on October 4, 2010 when he said Buhari’s ‘insensitivity to Nigeria’s diversity and his parochial focus are already well-known’. Today, El-Rufai is serving this same Buhari,” the stament noted.