President Goodluck Jonathan’s recent Facebook claim about three weeks of uninterrupted electricity supply to Anambra state capital, Awka, is nowhere near the reality, residents of the town said in a quick rebuttal that again casts doubt on the president’s public claim about his achievements. 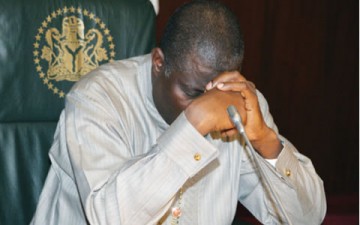 Residents from several streets of Awka said while power supply had improved in their areas in the past couple of weeks, the difference was fairly minimal to be regarded as “steady” since interruptions have continued.

“They give us light mostly in the day time and take it during the night when we need it most,” said Mike Nweke, who lives along Zik Avenue, and runs a shop at Eke Awka market. “In spite of the fact that our NEPA credit finishes within days of recharge. There is nothing to celebrate.

Four other residents of the area corroborated that claim of improved power supply over the past three weeks, but they all added that the usual power failure persisted.

At Ifite Awka, mostly habited by students of Nnamdi Azikiwe University, residents said the only difference they witnessed in recent weeks has been the stoppage of the power rationing called “One day ON, one day OFF”, which makes light available to different areas on alternate days.

“Before they use to share light for us and that made us to be having light once in two days but now that has become history because they are now giving us light everyday though the power supply has never been stable as claimed by the president,” one student said.

The responses, randomly drawn from several parts of Awka, particularly refuted the president’s claim about “uninterrupted public power” in a Facebook comment on Thursday.

In the unusual post, which the president said was meant to “drown out the unacceptable negatives in the polity”, Mr. Jonathan highlighted the appointment by telephone company, MTN, of its first Nigerian Chief Executive, as the proceed of his administration’s resolve to build local content; and spoke of steady electricity in Awka, and the registration of the new party, All Progressives Congress, as a reflection of the success of his government’s reforms.

“The second occurrence is the celebration by the city of Awka, in Anambra state of three weeks of uninterrupted public power supply and counting,” Mr. Jonathan wrote. “More cities will soon be able to have such celebrations because the Roadmap to Power Sector Reforms is having the desired effects with almost all of Nigeria’s electricity Distribution companies (Discos) and Generating companies (Gencos) now in private hands as I promised on the 26th of August 2010 in Lagos when I launched the Power Roadmap.”

For a president whose past claims on achievements, particularly about power supply had all turned out fictitious, and were roundly refuted by Nigerians, his remarks about Anambra state immediately stirred swift reactions from Nigerians.

Readers who responded to PREMIUM TIMES’ call on Facebook, asking Awka residents for response, provided mixed opinion of the situation in the commercial state.

While a majority denied the president’s claim, a few admitted the situation had improved.

A respondent, Oraneto Ndubuisi, affirmed, “For real, four weeks now”, while another, Toby Obaji, interjected, “Wait a minute, are you guys trying to say three hours or three weeks. Well, if its three hours …yes, sometimes. If you actually mean three weeks, then it’s not this Awka, might be the Awka in Japan.”

Other residents from different parts of the town, interviewed by our reporter in Awka, returned a verdict that largely disclaimed Mr. Jonathan’s.

At Ogechuckwu Street, five people interviewed said there was no difference in power supply in the area over the past three months because they still used generators at night.

At Emma-Nnaemeka Street, residents also denied there was stable power supply in the area as claimed by the president.

“Enough of that lie and those people presenting those lies to Mr. President should stop it,” one man, visibly angered by the question, said.

In Akoyele Street, one resident who gave his name as Uche, said although an equipment was stolen from the transformer in his neighbourhood weeks ago, resulting in total outage in the area, the situation has only improved to the previous unstable power after residents contributed money to replace the equipment.

“Light no dey my house now as I dey talk to you,” he said in pidgin English.

At Ichida Street, two residents there dismissed the president’s claim as political rhetoric that sought to woo supporters ahead of the forthcoming governorship election in the state.

“I think this is a campaign style of the PDP, they want to use lies to capture Anambra in the forthcoming election and we shall resist them,” a resident who refused to disclose his name said.

Those who spoke at Araba Street, said although they had witnessed a little improvement in power supply over the past few weeks, the power was never stable. One resident in the area further said that while power in the street improved minimally in the past three months, it was “nothing to celebrate”.

A similar reaction came from Arthur Eze Avenue, where locals chided the president for often failing to verify information passed to him.

“Oga Goodluck should always cross-check every information given to him before announcing them to the public. He should stop betraying our trust in him,” one residents who gave her name as Florence said.

At Dike Street, a resident who gave his name as Nzekwe Echezona, gave a similar response about improved but never stable electricity.