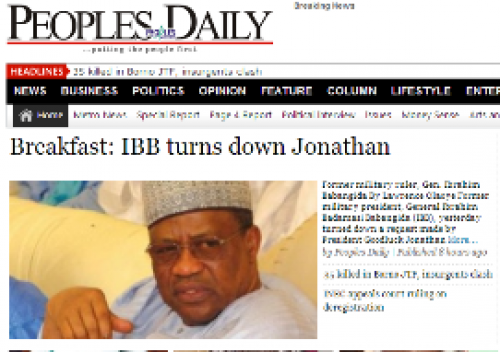 The Presidency has just released a press statement denouncing a media report on Tuesday which stated that President Goodluck Jonathan was purportedly turned down by former military president, General Ibrahim Babangida (rtd), when he offered to visit him in the spirit of Ramadan at his Hilltop Mansion in Minna, Niger State.

The Presidency described the report as not only ‘mischievous’ but ‘completely untrue’ and has demanded a full retraction of the false report which it says demeans the Office of President Jonathan.

The statement, which was signed by Special Adviser to the President on Media and Publicity, Dr. Reuben Abati, noted that “Although President Jonathan participates in the Ramadan fast every year in solidarity with Nigerians of the Islamic faith, he has never as Vice President or President of the country visited the residence of any individual to break his fast.

“Rather, it has been the President’s custom to regularly invite Moslems from all strata of society to break their fast with him at the Presidential Villa during the month of Ramadan.

“In keeping with that established practice, President Jonathan has been busy hosting Moslems, most evenings of the current Ramadan season.”

While expressing respect for the former military ruler, the statement declared that Mr. Jonathan “has never indicated any interest in visiting him at Minna during the current Ramadan.

“Therefore, there could not have been any “turning down” of a visit by President Jonathan by the former president.”

The statement condemned the decision of the editors of the newspaper to publish what it called ‘arrant falsehood’ as fact in spite of its vigorous rebuttal which is a further manifestation of a continuing effort to sow the seeds of discord in the polity.

Continuing, Abati said, “Although the newspaper cites a phantom “reliable presidency source” and “a source close to the former president” to buttress its fictitious report, the editors of Peoples Daily know fully well that they can never prove the veracity of the false claim that President Jonathan either offered to break fast with General Babangida in Minna or was turned down by the former president.”

The Presidency, therefore, demanded a full retraction of the report which it said “demeans the Office of the President of the Federal Republic of Nigeria and an apology by the newspaper.”