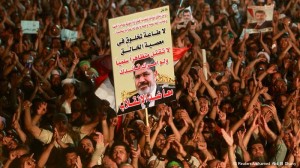 Supporters of ousted Egyptian President Mohamed Morsi continued to rally in Cairo, despite calls by the interim governments for protesters to leave two camps set up in the capital.

Witnesses on Thursday told Al Jazeera that military helicopters were hovering at low altitude over the sit-in at Cairo’s Rabaa al-Adawiya district, where demonstrators have been calling for the reinstatement of Morsi after his removal by the army on July 3.

Tn a statement on Thursday, the country’s interior ministry urged protesters to leave the camps, offering “a safe exit” to those who heeded the call.

The ministry “calls on those in Rabaa al-Adawiya and Nahda squares to let reason and the national interest prevail, and to quickly leave,” it said in a statement.

On Wednesday night, the interim government ordered the army to take action against protesters. It said it authorised police to take “gradual steps” to break up the weeks-long rallies.

No specified date has been decided upon for clearing out the sit-ins, Hany Abdel Latif, the interior ministry spokesperson, told Reuters news agency.

Following the warning against the rallies, the US State Department urged Egypt to respect the right of peaceful assembly.

“We have continued to urge the interim government, officials and security forces, to respect the right of peaceful assembly,” deputy spokeswoman Marie Harf told a news briefing. “That obviously includes sit-ins”.

Germany’s Guido Westerwelle, the first foreign minister to visit Egypt since Morsi was deposed, urged authorities to avoid “the appearance of selective justice”.

“There is no justice of vengeance and no selective justice. There is law and it applies to everyone,” he said on Thursday following talks with his counterpart Nabil Fahmy.

More than 200 people have been killed in weeks of violence since the army deposed Morsi.