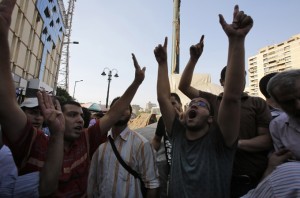 Pro-Morsi protesters in their thousands have gathered in several areas of Cairo after Friday prayers, despite tight security.

Security and military forces were deployed around the Egyptian capital, closing off traffic in some major thoroughfares and in the city centre.

Anti-coup protesters have called for more than 20 rallies accross Cairo and Giza.

In the southern Maadi district, several thousand protesters marched from the Al-Rayan Mosque to Arab Square. They chanted “coup, coup” and “down with military rule”.

The rallies were seen as a test of whether supporters of the deposed President Mohamed Morsi can keep up their pressure despite an intensive security crackdown on the Muslim Brotherhood, from which he hails.

Protesters also gathered to protest against military rule in several other Egyptian cities.

Although there were no widespread clashes, Interior Ministry sources said fighting erupted in Tanta city of Gharbia governorate, between pro-Morsi protesters and local residents, when Morsi supporters put up pictures of the deposed president in Said street. One person was killed during the fighting, sources said.

The demonstrations came a day after deposed autocrat Hosni Mubarak was released from prison and placed under house arrest in a military hospital in southern Cairo, adding to tensions.

They are also the first since the Brotherhood spiritual leader Mohamed Badie was arrested and accused of instigating violence.