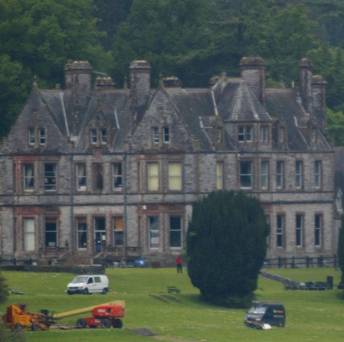 Castle Leslie in Co Monaghan, where a teacher from Northern Ireland has received royal treatment after marrying a Nigerian prince

A teacher from Northern Ireland, Kirsty Crooks received the royal treatment when she married the Prince of Lagos in a “traditional Irish wedding”.

Kirsty Crooks, 27, became a princess when she tied the knot with Prince Mustapha Oniru of Lagos in her home village in Co Armagh.

They exchanged vows at Loughgall Presbyterian Church on August 15, 2013. Guests included the groom’s parents, the King and Queen of Lagos.

The former Miss Crooks said: “I was provided with a new wardrobe to start my life as a princess, so it had definitely been very exciting.”

The story continues after the photos

An entourage of officials and chiefs accompanied them.

After the church service, the guests travelled to a lavish reception at Castle Leslie in Co Monaghan.

The bride met her prince through her job at the British International School in Lagos. The school is owned and run by the royal family and Prince Mustapha is the school administrator.

The couple chose St Tropez and Monaco as their honeymoon destination.

Local newspapers report that the new princess plans to return to Lagos next year after completing the coming school year in Uxbridge, London, where she teaches French and German GCSE and A-level.